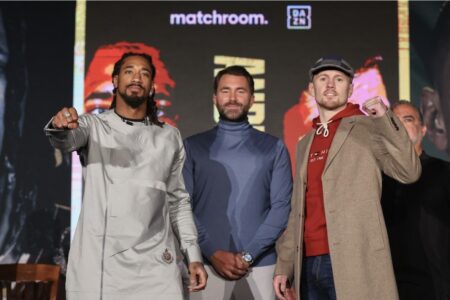 Demetrius Andrade has vowed to destroy Jason Quigley and make a big statement as he makes the fifth defense of his WBO World Middleweight title on Friday night (November 19) at the SNHU Arena in Manchester, New Hampshire, live worldwide on DAZN.

Andrade (30-0 18 KOs) has been circling his fellow champions at 160lbs on the hunt for unification battles that have yet to surface, but continues to remain active and fighting hungry challengers like Quigley (19-1 14 KOs), with the 30 year old aiming to become the fourth Middleweight world ruler from Ireland.

‘Boo Boo’ meets his fifth European opponent for his crown and the two-weight World king is determined to send him back empty handed like he’s done to all-comers so far – and deliver a performance that will have fans and pundits clamoring for him to land the big fight he craves.

“I’ve been training to be destructive,” said Andrade. “Someone is going to stop this fight. Put your house on it.

“I look to give everybody a beating in a sense, to outclass them. Going in and knocking people out is cool but I also like to get rounds in and show my skill level. We just saw Canelo and Caleb Plant, it took him 11 rounds to end the fight but I’m not Caleb Plant. There’s a whole lot more in me than what Caleb showed. That’s the type of fight that I would like to get in and do though, to show my skills, my heart, my conditioning, what I am made out of.

“Anyone can get caught with a lucky punch or caught cold and fight’s over. I know KOs sell and that’s cool, but the wealthiest athlete in the sport was Floyd and he didn’t knock anyone out for a long time at the end. So, it’s funny how KO’s sell, but when I get KOs I don’t get the fights; I think that they would rather fight me thinking that I don’t have power rather than having power. At the end of the day, do they want to get in the ring with me? Jason Quigley said yes.

“I have a good contract, I am making good money and at the end of the day, I can’t get frustrated and be emotionally driven as it’s out of my control, I am just focusing on me and right now that’s Jason Quigley on November 19 and I am happy for that as it’s one step closer to show people how much longer are they going to keep avoiding me, but I don’t get paid if I don’t fight so it’s not about them, it’s about me, what am I doing? How do I keep showing people that yes, Demetrius should be fighting them, and we want to see it?

“I’m excited, boxing is back in full force, the fans are back in the arena, and we’re near my hometown and we’re going to bring championship boxing to a state that’s never had it before, that’s a real honor and I am ready to get back in there and show people what I am about.

“My fight in Providence was amazing and I would love to fight there again but New Hampshire is next door so that’s cool too, it’s just a little drive for me so that’s good too!

“Jason was an Olympian, he’s 19-1 and his name was in the mix to fight Canelo at one point, so for me to step in the ring with someone they have to be good and for Canelo to consider fighting someone he must be pretty good – we’re going to do what we are going to do and that’s make quick work out of Quigley.”