Deniz Ilbay: I Have Seen Weaknesses in Lewis Crocker 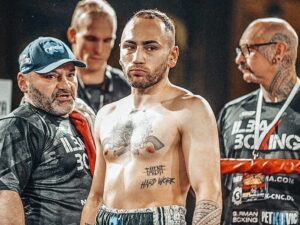 Deniz Ilbay feels he has the perfect game plan to defeat Lewis Crocker when they collide for the WBO European welterweight title on this Friday’s huge #MTKFightNight.

Ilbay (22-2, 10 KOs) challenges undefeated Crocker (12-0, 7 KOs) for his title at the University of Bolton Stadium, live in the US on ESPN+ in association with Top Rank, and worldwide on IFL TV.

The German has won numerous titles in his career and has also gone the distance with former world title challenger Egidijus Kavaliauskas, and he has identified areas in Crocker that he thinks he can exploit.

Ilbay said: “We looked at a few fights from Crocker and we picked out a few weaknesses that he has got. I’m not going to reveal them just yet, I will show them to everyone on March 12th.

“This is the toughest fight of his career so far, and I’m pretty positive that with a win here my entire team from First to Fight Management and Team Ilbay Boxing can make big things happen in 2021.

“There is a huge year ahead, but I have learned in my career to never look further than your upcoming fight, so I’m just focused on Lewis Crocker.”

Jessica McCaskill vs. Cecilia Braekhus Rematch This Saturday On This Day: Terry McGovern Retained His World Title in 1900