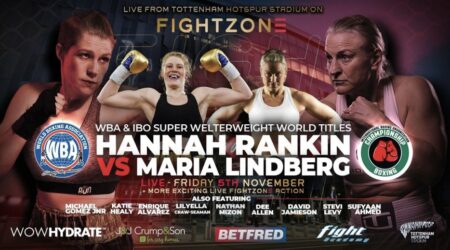 It’s all eyes on Tottenham Hotspur FC’s Banqueting Hall this Friday (November 5) with one of the biggest fights in women’s UK boxing this year taking centre-stage.

Rankin, 10-5 (2), is the bookies favourite ahead of the hugely-anticipated bout but Fight Academy promoter Dennis Hobson says no one should be ‘sleeping’ on Lindberg. The Scandinavian may be 44 but is always in great shape and comes into the contest with vital experience. A former holder of the IBF version of the world title, Lindberg has lost just seven times in 29 contests (every loss has been a title bout), stopped just once, and has 10 early finishes.

“I absolutely think people are ‘sleeping’ on Lindberg,” said Hobson, who has worked with multiple world champions including Ricky Hatton, David Haye and Clinton Woods.  “I have high expectations of Hannah but I’m thinking ‘everyone seems to be taking this as a given’, and it’s not.

“As a trade fight, this is a 50-50, and that’s what people are looking past.  And I don’t want it to be [a 50-50 fight] because I obviously want Hannah to win, but it’s a proper competitive fight – and so it should be as it’s for two world titles.  This is a life-changing opportunity for Maria, and she’s not coming to play second fiddle.  If Hannah shows any chink in her armoury then she’ll struggle.  This could go either way, but hopefully Hannah takes control.  She’s on a big stage, we’ve managed to get her this opportunity and now it’s over to her.

“This is a proper, competitive bona-fide world title contest and it’s going to be an exciting fight.  Neither of them will take a backwards step, and there’ll be plenty of drama.  I’m excited because it’s the first women’s world title fight I’ve been involved in and to have our first women’s world champion will be another breakthrough.  Hannah is lovely, she’s got a great story, is intelligent and great to work with.

“I’ve made history a few times with different fighters and if Hannah wins, it builds on our legacy and shows again just what we’re capable of.”

Yesica Bopp WBA female fighter of the month Round 12: A tribute to women’s boxing by Mauricio Sulaimán