Dennis Hobson: We want to create a hotbed in Scotland 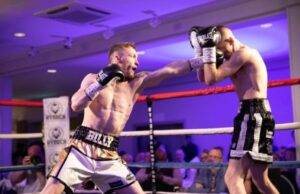 Major fight figure Dennis Hobson says he wants to harness Scotland’s boxing talent and create a fight fortress North of the Border ahead of a big night of action at New Douglas Park in Hamilton on July 31.

In conjunction with influential Scottish manager and promoter, Sam Kynoch – Hobson’s Fight Academy outfit have lined up a triple title fight card for Scotland’s first live show since Lockdown, with all the action broadcast live by new boxing broadcaster, Fightzone.

Topping the bill for the Commonwealth Featherweight crown will be Bearsden’s Nathaniel Collins in a tough ask against Ghana’s Felix Williams.  Undefeated at 7-0 (2), Collins, 24, has had it all his own way as a pro but Williams is a big step up.  The big-punching African, 31, has lost just twice in 31 outings, has iced 22 of his foes, and gave former British champ Josh Wale a testing night in 2019, losing a majority decision. Nathaniel, who represented Scotland at the Commonwealth Games in 2018, is well thought of in fight circles and will want to impress in his first shot at a major title.

The Latin American pair come to the UK with impressive records – Velazquez has lost just once in 11 outings, while Gonzalez has just two defeats in 11 fights, and boasts six early finishes. With British fighters like Tommy Frank, Josh Warrington and James Tennyson all coming unstuck against Mexican fighters recently, Hobson is hoping that the Scots duo can stop the rot.

“Nathaniel is well thought of and this is a good test for him. Williams is beatable, but he can also fight, so we’ll see what Nathaniel is all about. Sam [Kynoch] really rates him, as do we at Fight Academy. When Williams boxed Josh Wale, he was extremely confident. He’s a puncher but sometimes fighters who have a leveller in each hand can reply on that too much and don’t have a plan B. I think we’ll see Nathaniel plant his feet and break him down but it’s a big test. Williams against Wale was a smashing fight, probably one of the best performances of Josh’s career. So it’ll be an interesting fight, and a cracking and entertaining one for Fightzone.

“We want to put our fighters in competitive fights; sometimes we have to look abroad and they don’t come any tougher than Mexican fighters. They are naturally hard and always a good test. The teams behind Billy and Dean want to test them out and it’s fights like this that are great learning fights. If they come through then we’ll see where we go, but we believe in them to get the win. It’s these kinds of contests that equip a fighter in the future to not be fazed and go all the way.

“Our philosophy is to get our stable opportunities, and that’s what we’re doing. We want to create a hotbed in Scotland with Sam [Kynoch], David McAllister and Iain Wilson, and hopefully develop a couple of world champions. We don’t want Scottish fighters to have to come down south to win major titles, we want them to be able to do it up in Scotland.

“The passion North of the Border is amazing, and sometimes Scotland has been starved of a bit of sporting success.  The football team doesn’t seem to do so well – a bit like my team Sheffield Wednesday! – but Scotland, like Sheffield, produces some fantastic top class fighters. It’s a hotbed up there, and it’s not been tapped into on a regular basis, and our aim is to do that up there with our partners.”

USA Boxing’s response to Inside the Games op-ed