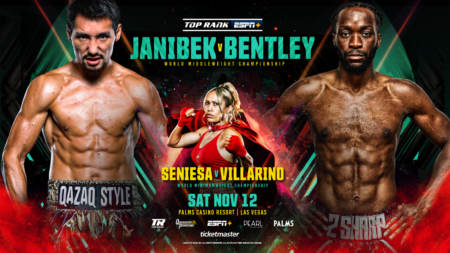 Denzel Bentley will fight for the WBO world middleweight championship when he takes on the champion, Janibek Alimkhanuly at the Palms Casino Resort in Las Vegas on November 12, exclusively live on BT Sport in the UK.

Promoted by Top Rank, in association with Frank Warren’s Queensberry, two-time British champion Bentley challenges the unbeaten Kazakh a matter of just under two months after making a successful first defence of his Lonsdale belt against Marcus Morrison in mid-September.

Battersea man Bentley (17-1-1, 14 KOs) first won the British title with victory over Mark Heffron in November 2020, but was defeated in his maiden defence against mandatory challenger Felix Cash. Bentley bounced back and regained his title against Linus Udofia in May of this year and subsequently stopped Morrison in four brutal rounds at London’s York Hall.

Janibek (12-0, 8 KOs), a 2016 Olympian from Zhilandy, Kazakhstan, took an express route towards winning a world title. He fought in his first scheduled 10-rounder in his sixth professional fight, winning two regional titles in a dominant showing over Cristian Olivas. Janibek’s last four bouts have been in Las Vegas, with four knockouts propelling him to the top of the middleweight rankings.

“It will be a good and exciting fight and I think it is a fight I can win,” said Bentley. So why not go out there and enjoy the theatrics of Las Vegas and come back with a world title. So I said yes to the fight straight away, 100%. It is a great opportunity for a world title and what fighter doesn’t want to be in this position?

“Like I have said before, I genuinely believe I can beat him and he is beatable. Everybody says he is scary, but I don’t see it. Maybe I am missing something. We will find out when we get in the ring anyway. I do think he is a good fighter and is slick. I think he is really comfortable in the ring and I think that is his best attribute, he is a really confident person. I haven’t seen him panic under pressure or put a foot wrong, really.

“I had a feeling I would come up against him so, when it came through, there was no way I could say no to it. It is a fight I am actually happy to take.”

The champion Janibek added: “I give Denzel Bentley credit for accepting the challenge when so many fighters ran the other way. “It is a great honor to defend my world title in Las Vegas at The Palms, and I will once again show the world what ‘Qazaq Style’ is about.”

Frank Warren describes going up against the notorious Janibek as a ‘golden opportunity’ for his middleweight star.

“Denzel Bentley is backing himself and completely believes he has got what it takes to win the WBO world middleweight championship from a formidable champion in Janibek Alimkhanuly,” stated the Hall of Fame promoter.

“It is a golden opportunity for Denzel to step up from being a respected British champion to starring on the world stage in Las Vegas. I can tell you that Denzel had absolutely no hesitation in accepting this fight and Janibek is a name he has mentioned to us on a number of occasions.

“I am delighted Denzel is getting this opportunity and happy to be working in tandem with Bob Arum and his team at Top Rank to deliver it for him.”

Bob Arum, chairman of Top Rank, insists he doesn’t anticipate the middleweight rule of Janibek to end any time soon.

“Janibek is the top middleweight in the world, and this fight will be the start of a long and accomplished championship reign,” he said.