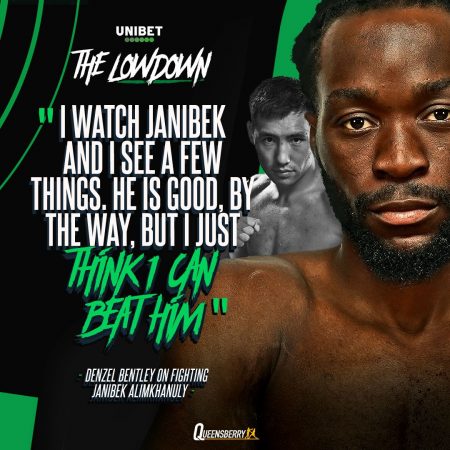 Denzel Bentley is ready to jockey for position in a middleweight division he believes is about to open up.

The new – and two-time – British champion, who regained his belt by defeating Linus Udofia on Friday, reveals himself as a student of the 160lb landscape and he suspects that some vacant world title belts could soon be floated on the open market.

“I am always keeping an eye on the division and looking at what’s good,” explained Battersea’s champion, talking to Dev Sahni on the Unibet Lowdown. “I have noticed that the division is opening up quite suddenly and I think Golovkin will retire soon, especially if he gets the Canelo fight next.

“Demetrius Andrade has moved up and they are waiting for him to officially vacate. Charlo will eventually go up and the division will be wide open.

“All I know is I want to be in a position to fight for an eliminator or near enough for a vacant title when that happens.

“I want to push forward and get some good fights in to help build my world ranking and I am still ranked with the WBO.”

With that in mind, perhaps a more immediate prospect for the 27-year-old could be a match with the winner of this weekend’s clash between Janibek Alimkhanuly and domestic rival Danny Dignum.

“Janibek has got good power and is quite slick. He is beatable and whether Danny can do it or not we will find out this weekend. As much as me and Danny are cool, I would love the winner of that fight and it would make a great fight.

“Recently I have been thinking about fighting Janibek and I really like that fight. I would fancy my chances against him, but we will have to see the outcome of this next fight.

“I watch Janibek and I see a few things. He is good, by the way, but I just think I can beat him.

Also, on the home front, there is always the possibility that new middleweight convert Hamzah Sheeraz could come into play in an in-house thriller.

“Yeah lovely, all my fights have been competitive and challenging so I would welcome a challenge like Hamzah Sheeraz. It would be better for all parties, including promoters and fighters, for us to fight for, at least, an eliminator.

“I am sure he would welcome that fight as well. I am open to it but, for now, I’ve got to make sense of things. If we can fight in an eliminator with the winner fighting for a world title, I think that makes perfect sense.”