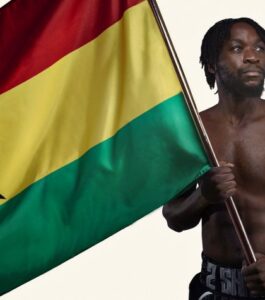 Denzel Bentley will wear his Lonsdale belt AND his Ghanaian heritage with pride when he looks to defeat Middleweight challenger Felix Cash on April 24th.

Denzel has been hard at work at the Peacock Gym readying himself for the biggest fight of his life, but was delighted he had the time to take the trappings of his British title success on a whirlwind tour of Ghana after his last scrap.

Bentley, 26, won the middleweight Lonsdale belt after a brutal stoppage of Mark Heffron and, with it being his third fight in under four months, he took himself off on holiday to the birthplace of his parents, where he still enjoys strong family connections.

The trip turned into something of a victory parade and the champ, along with his belt, was the cause of much celebration amongst the local population.

For the 14-0-1 man from Battersea, it was a source of great pride for his accomplishment to be received with such joy in his second home.

“It meant a lot and let me know how proud everyone was back home and how much they supported me and continue to support me,” said the fighter known as ‘2Sharp’.

“It has kind of got me feeling that I don’t want to let them down now by going back there empty handed or having taken a step back. It is a good sort of pressure that will make me keep my head down and keep grinding towards the success that I want.”

“I am Ghanaian by blood and British by birth. I am proud to be British, I was born and grew up here aside from going to Ghana for a couple of years when I was younger. This is home, but also where my parents are from is home too so when I go back I am a mix of the two together and I know I have got both of my people behind me.

“It is amazing really and I couldn’t ask for any more. You could say I have got the best of both worlds. Being back and forth is good because I am accepted in both countries.”

The pinnacle of Bentley’s most recent foray to Ghana was an audience with the King of the Ashanti Kingdom, Otumfuo Nana Osei Tutu II, which he does admit was a nerve-racking experience.

“Yes! Oh my days, I haven’t been so nervous before, more than even when I made my debut. I didn’t want to get anything wrong, there are a few protocols you need to observe and I haven’t been in that position before.

“I was presenting myself in front of royalty to be congratulated and I needed to get it right. I wanted it to be like the perfect day because it is something I will remember forever. As soon as they called out my name to come and meet him the nerves struck and everyone around me was telling me how to approach it.

“When I got there he was nice and relaxed, giving me blessings and congratulating me, saying how proud he and the people of the Ashanti are of me. It was good to hear those words because I’m just a kid that has come from, really and truly, nowhere.

“For him to take me in, congratulate me and show me love was special.”

If Bentley manages to add the Commonwealth title to his British when he takes on Felix Cash on April 24 in a highly-anticipated collision, he will emulate one achievement of a true Ghanaian hero, Azumah Nelson, who held the belt at featherweight in 1983.

“Yes, and I met him out there as well,” he reported. “It means a lot in Ghana because they are part of the Commonwealth and, although it is not the world title, they do appreciate and would be proud of me winning it.

“When I met Azumah he was telling me to go out there and be better than he was. I am sure he would be proud if I win it and it is a good title to go out and win.”

Denzel Bentley (14-0-1) vs Felix Cash (13-0) for the British and Commonwealth middleweight titles headlines a bumper night of boxing, live on BT Sport on April 24.

Also on the card, light heavyweight star Callum Johnson (18-1) marks his return to the ring with a battle against the experienced Emil Markic (32-2) for the WBO Global championship. Anthony Yarde (20-2) takes on the unbeaten German Emin Atra (17-0) over 10 rounds as he bids to get back into title contention.