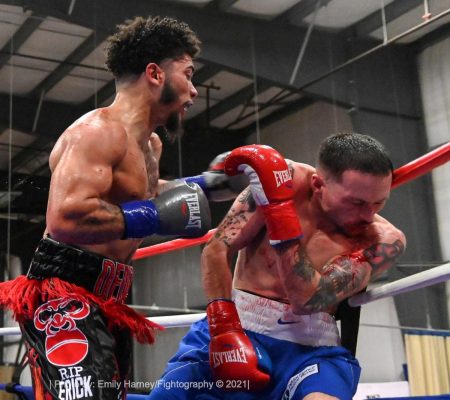 “Road 2 Stardom”, presented by Granite Chin Promotions, is the first day-night professional boxing doubleheader in Massachusetts history. Boxing fans will be available to watch both shows via live stream at BXNGTV.COM for only $24.99.

The 26-year-old Whitley, who is trained by former pro boxers, his father Derrick and uncle Darren Whitley, takes Brazilian Maycon Oller Da Silva (1-4, 1 KO) on the evening’s portion of the event in the 6-round main event.

“I’m really excited,” Denzel talked about headlining a show for the first time. “It’s an achievement of mine. I was in the co-feature my last four fights. This tells me I’m on the right track. I’m the top guy on this show. I’ll be a little nervous but that’s natural before a fight. I’m comfortable now doing what I need to win, flowing smoothly and adapting faster. My ring presence has improved, and I won’t hesitate to showcase my skills to show my skills are better.

“I have my foot in the door (headlining for first time). Everything’s slowing, no complaints. I’m going to be stepping up the level of competition. This is my last fight at 6 rounds. I’m fully focused on this fight to win impressively in front of my fans. And there will be more fans there for me this show because headlining for the first time has caused a buzz.”

Whitley will be opposed by a fighter, Oller Da Silva, who he’s familiar with because Oller lost a 6-round unanimous decision this past April 29th to Whitley’s brother, Derrick Whitley, Jr..

“I was supposed to fight him (Oller) before,” Whitley explained. “He just fought my brother. He got to fight him and now I have a chance to fight him. If I get a knockout, great, but at the end of the day, I won’t be looking for a knockout. It’ll be a good night if I do. I know this show is about me. I won’t lose focus. This is my job!”

“With Denzel,” Granite Chin president Chris Traietti commented, “we are taking a steady pace to get him on the national level. This will be his last 6-round fight and we plan to up his competition to 8 and 10-round fights that are coming. He was kept busy, so he is staying sharp, and the increase in competition shouldn’t be an issue. I am excited for what’s to come.”

Massachusetts intra-state rivals Nathan Balakin (3-1, 1 KO), of Tyngsboro, and Attleboro’s Bryan Urday (2-1) are matched in the 6-round co-featured event for the vacant Massachusetts Welterweight Championship. Balakin vs. Urday has the makings of the Fight of the Night.

Undefeated Floridian welterweight Josniel “TG” Castro (8-0, 6 KOs), who has New England ties and supporters, returns to continue his march toward the top against Bryan Goldsby (5-16) in a 6-rounder.

In another 6-round bout, Woburn (MA) junior lightweight Julien “Black Dragon” Baptiste (3-2, 2 KOs) attempts to get back on the winning track in a rematch against Alfred “Keenan” Raymond (1-2), of Warwick (RI), who won their first encounter last November by way of a 4-round split decision.

Brockton welterweight David Ribeiro, a 2020 New England Golden Gloves champion, is scheduled to make his delayed pro debut in a 4-round bout versus Rakim Johnson (6-17-1, 5 KOs). Ribeiro was originally slated to make his debut May 7,, but his opponent pulled out of their fight at the last moment.

Steve headlines in his first scheduled 8-rounder against Florida veteran Manny “Shake Em’ Up” Woods (17-6-1, 6 KOs), while Quinton is matched against Boston’s Tracey “The Titan” Johnson (4-10-6), whose brother is world champion Demetrius Andrade, in a 6-round fight.