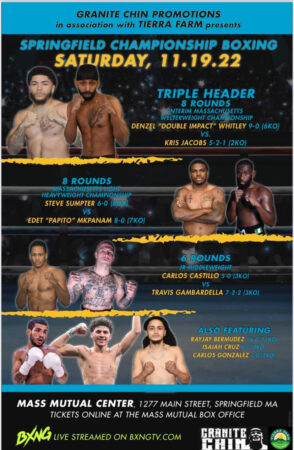 “Springfield Championship Boxing” will be streamed live on www.bxngtv.com.

“Denzel has been a rising star on the local boxing scene,” Granite Chin Promotions president Chris Traietti said. “Since turning pro, he has been competing at a rapid pace and continuously stepping up in competition. Kris Jacobs represents a real test for Denzel to show he is ready for the next level. Thank you to Boston Boxing Promotions for working with me to make this fight happen. With a win over Jacobs, the next one in line for Denzel would be Bryan Urday. Urday was the original opponent but, due to family obligations, November 19th didn’t work out. But putting the cart before the horse in this situation would be foolish, nobody is underestimating the ability of Kris Jacobs. Kris has a ton of experience and comes to fight. With that said, I have all the faith that Denzel will show up ready to go.”

Whitley (9-0, 5 KOs), fighting out of nearby Holyoke (MA), is a legacy boxer, trained  by former pro fighters and brothers, his father Derrick and Uncle Darrin. His showdown with Jacobs (5-2-1, 2 KOs), in a slated 8-rounder for the vacant Massachusetts State Welterweight title.

“My father has a New England title belt in the gym, I want to add my Massachusetts title belt,” Whitley said. I don’t know much about him (Jacobs). I saw him fight once, but they can give me anybody and I’ll still be ready. I have to do my job. I’ve trained my body to do everything, whether I’m fighting a boxer or puncher. I’ll use all my skills to adapt in the ring.”

Jacobs, of Fall River (MA(,  has defeated three previously undefeated opponents, including 2-0 Ryan Thomas Clark in his last fight by way of a 6-round split decision.

“I’ve seen him fight on the same card I’ve fought on or my friend’s card,” Jacobs remarked. “He (Whitley) fought my friend David Riberio in the amateurs. I expect to beat him (Whitley). I’ve trained even more seriously because he is undefeated. He has to be perfect. I’ve lost and understand it. Expect to see my A game there. It’s all on him!”

The Western Mass. tripleheader showcase also includes a 6-round throwdown between 24-year-old Castillo and  Revere (MA) welterweight Travis Gambardella (7-2-2, 3 KOs). Castillo is a skilled boxer who is stepping up in competition to fight Gambardella, who has won 5 of his last 7 fights and his two draws could have easily been victories.

The undercard is topped by undefeated lightweight prospect RayJay “The Destroyer” Bermudez (16-0, 11 KOs), of Albany (NY), against battle-tested gatekeeper Tyrone “Hands of Stone” Luckey (15-18-4, 11 KOs) in an 8-round match. Bermudez is trained by his uncle Hector Bermudez, who owns and operates a gym in Springfield.

Tickets range between $203.00 and $48.00 and are available to purchase online at https://www.massmutualcenter.com/events/detail/springfield-championship-boxing