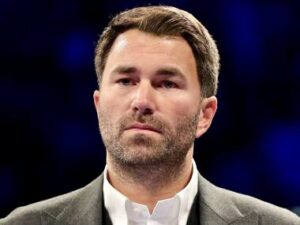 “Deontay Wilder has just vanished from the earth and just doesn’t fancy fighting anymore, or his advisers have done the worst contract in boxing history,” Hearn told IFL TV.

“It just expired. We’re in a global pandemic. You’re telling me that you’ve done a contract that doesn’t protect yourself against force majeure, and you no longer have a rematch clause because it just expired? I don’t believe [Wilder manager] Shelly Finkel would have done that, but Arum and those guys are goading them, saying, ‘Goodbye, it’s expired.’ And Shelly is coming out, going, ‘I hope we can do the fight.’ Why aren’t you coming out to protect your rights? Say, ‘No, you signed the rematch, here’s the contract. We’re having it. We’ll still take it.’

“When Anthony Joshua lost to Andy Ruiz, there wasn’t one day that would pass without him thinking about avenging that defeat. When Dillian Whyte got knocked out [versus Alexander Povetkin]… as soon as he got out of that ring, he said, ‘I want that rematch’ … They want to come back. They won’t rest until they get revenge or at least attempt revenge. I just can’t understand. And what’s with the silence [from Wilder]?”