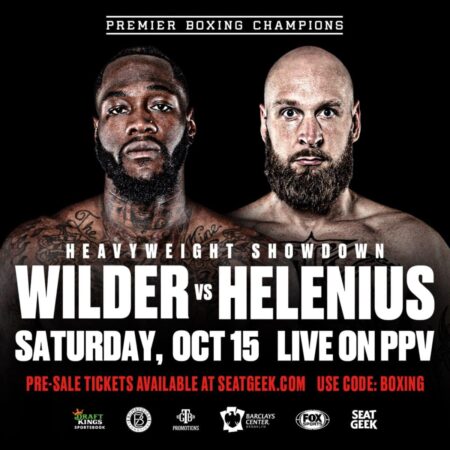 Former heavyweight world champion and boxing superstar Deontay “The Bronze Bomber” Wilder previewed his long-awaited return to the ring in an all-new episode of “The Pivot Podcast” as the celebrated knockout artist promised fan-friendly action in his PPV showdown against Robert Helenius this Saturday, October 15 at Barclays Center in Brooklyn.

“I give it all 110% percent,” said Wilder. “I tell people that I only have three years left that I want to dedicate to this business. I want to get back to the big fights and to giving the fans what they want to see, and that’s me risking my life for others’ entertainment…I’m doing it for the people this time. It’s not about just my family anymore, it’s about everyone who I’ve motivated, inspired and encouraged all over the world.”

The former longtime WBC Heavyweight World Champion, who reigned from 2015-2020 with one of the best knockout percentages in boxing history, sat down with the show’s co-hosts and former NFL stars Ryan Clark, Channing Crowder and Fred Taylor to open up about his early days and how he turned a mean streak into generational wealth.

“I never knew why I had such a quick temper,” said Wilder. “But over time you learn to put away childish things and that’s the story of me. I had to understand what was worth me putting action toward and what wasn’t. Especially when you start having kids, because everything you do is about them. That’s when I had to start thinking about my actions, because I knew that if I wasn’t in their lives, then nobody was getting fed.”

For Wilder, his origin story in the sport started with little intention of reaching the magnificent heights he’s reached so far. Instead, it featured a “street fighter” with a young daughter fighting a medical condition, who bet on himself to ultimately change the lives of him and his family.

“When you get into a boxing ring you become organized,” said Wilder. “It’s a structure and a discipline. It requires a certain standard to compete and really do it. When I had my first sparring session is when I realized that I could be something. The only reason I even went into the gym was to become a ‘journeyman’, because I was just doing it due to my daughter having Spina Bifida. It led me to the gym.

“I thought I could double my money if I made it to the Olympic team. I knew that would help me even more than just going right into the journey as a pro. I took that route and made the Olympic team and medaled, all in a year and a half…the rest is history from there.”

One of Wilder’s most notable from throughout his career, actually occurred outside of the ring. In an interview during the week leading up to his first of three fights against fellow heavyweight great Tyson Fury, Wilder unleashed a passionate screed about the struggles facing the black community that immediately went viral and became a rallying cry for the fighter and beyond. As he explained, the moment was made possible because of his willingness to use his platform to speak freely and openly.

“Because I have a platform where I can speak and people will listen to what I say, sometimes if they love what I say, they’ll apply it to life,” said Wilder. “This position allows me to move further and speak about injustice…If your culture hasn’t experienced it, then you’ll never understand what we mean by that. You won’t have to understand what it feels like… If you can have strong opinions and can make people change their mindset on a certain subject, then you have meaning. Certain athletes won’t dare touch on certain subjects, because they have a cloud over their head that can rain on their parade. But I don’t have that, I run my own parade. I dictated my career a long time ago. I have more freedom with what I want to say and what I want to talk about. I love speaking out for our people.”

Before moving into this next phase of his career, Wilder set out for a retreat to the Rythmia Life Advancement Center, which drew the attention of Taylor who asked him what he sought from the experience and what he gained since partaking.

“I was seeking clarification of my life and clarification on if I was on the right path and the right journey,” said Wilder. “I thought this facility would give me some type of guidance. Although we may see things or hear things from people in our world, we can always change our course…Being there brought me a lot of happiness. I wanted to instill that happiness and find that happiness within myself…I got everything I needed out of there. I got peace of mind, because I learned where my journey leads.”

The show’s co-hosts also make sure to ask Wilder about another key moment that led to his final career pivot and decision to return the ring this Saturday night on PPV. For Wilder, he gained the final motivation he needed to return after meeting with fans who had come out to watch a statue of Wilder be unveiled in his hometown of Tuscaloosa, Alabama.

“Certain things, you just don’t have words for,” said Wilder. “My vocabulary is not big enough to express the true feeling of how I felt. I was in a very emotional state to be presented that statue. It was amazing to see people from all over the world want to come and commune and celebrate that moment in time…Especially being in the heart of Dixie, because they put a black warrior right by the Black Warrior River. That was an area where blacks were prohibited by whites unless driven to clean their houses, and up the street they sold slaves. It’s crazy to think about all that. I never would have thought in a million years that I’d receive a statue, but especially for the place it happened in, it was an unbelievable feeling.”

Jay McFarlane: “It will be my night in Rome!” Naoya Inoue vs. Paul Butler undisputed clash confirmed for Dec. 13