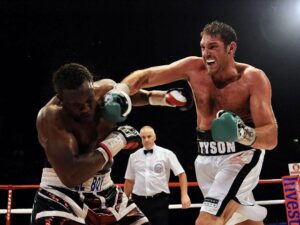 Sometimes a fight is proposed or made that really has no point whatsoever and this is one of them. Derek Chisora want’s Tyson Fury if he beats Oleksandr Usyk.

Tyson Fury and Derek Chisora first fought in July 2011 with Fury winning comfortably on points 118-111, 117-112, 117-112. They had a rematch on November 2014 with Chisora’s corner stopping the fight after the 10th round having faced a switch hitting and improved Fury. Fury controlled the fight easily from start to finish.

Since then, it can be argued that Chisora is in decline and Fury has still improved pulling off three remarkable victories (well, one was a drawer but not a popular verdict), against Wladimir Klitschko and Deontay Wilder.

“Tyson is unbelievable – the only man who doesn’t have a defeat on his record,” Chisora said. “It would be a great fight with ‘The Gypsy King’ because he has always promised me a third fight. He owes it to me. We speak every day. He always says he wants to give me that fight.”

If, and the odds do not favour this, Chisora does defeat Usyk on October 31st (we pick Usyk on points or by late stoppage) surely if he was granted a shot at Anthony Joshua he should take it! That said, who fancies Chisora vs Whyte 3.