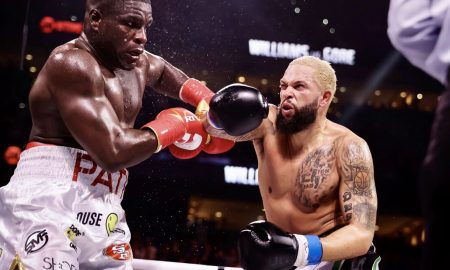 A crowd-pleasing four-round special attraction between three-time NBA All-Star Deron Williams and the NFL’s third all-time leading rusher Frank Gore. When the dust settled and the final bell tolled, it was Williams who came out victorious on the judges’ scorecards via split-decision. The scores read 38-37 and 40-35 in favor of Williams, and 38-37 in favor of Gore.

“Honestly, I probably looked terrible out there,” said two-time Olympic Gold Medalist Williams. “I felt like my last five sparring sessions I was on point. My head wasn’t coming up. As soon as you get out here and you start getting touched, it’s a whole different thing. All your training goes out the window. It was fun. I had a chance to get out here, but like I said coming in, it’s one and done.”

Both legends from opposing sports came out swinging in the first round of their boxing debuts. The frantic action saw both fighters exchange big right hands and in the second round, the action continued at a lightning pace.

Following some sloppy moments that resulted in both fighters wrestling each other through the ropes, the signature moment from the fight occurred when Gore showed his inexperience and stopped defending himself for an instant. Williams capitalized by landing a massive right hand that stunned Gore. With the former San Francisco 49er star holding himself up against the ropes, referee Christopher Young scored a knockdown for Williams.

“I used my wrestling background to my advantage,” Williams said. “I just wanted to prove to myself that I could get out here and do this. Everybody that’s talking on Instagram and Twitter, they wouldn’t step in here in front of all these people and on PPV for their first fight. Hats off to Frank. He had a dream. He had a goal. In my mind, we’re both winners tonight.”

Throughout the four rounds, Williams landed 48 of 156 punches thrown and Gore landed 38 of 166 punches thrown. The 6’3” Williams, who held an eight-inch reach advantage, also out-connected the 5’9” Gore 35-28 on power punches.

“It’s all good,” said Gore. “He won the fight tonight. He fought hard. I fought hard. I just still have to learn some stuff. He did a good job tonight. We’ll see if I fight again. I had fun tonight. I’ll go back and talk to my team to see what’s next.”