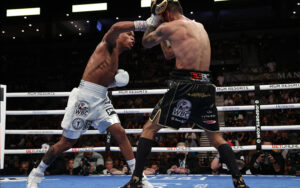 The fight held at Mandalay Bay’s Michelob ULTRA Arena was etched with late drama. Haney took the unanimous decision victory, but the 23-year-old American had to dig deep to defend his WBC crown.

Devin Haney had ample control on the first half of the match using slick movement and his quickness to repeatedly connect on  Linares; however, Linares, in the last rounds, showed why he is a historical multi-champion and hurt  his rival at the end of round 10 with a massive right hand impact.

Haney had to be resourceful in the eleventh and twelfth, holding on for dear life to avoid a repeat dose.

After passing this complicated test, Haney agreed  to face the best of the division: “If Teofimo is next, let’s do it.” He stated.

Devin Haney improved his undefeated record to 26 wins with 15 KOs, while Linares came out of the ring with a professional record of 47 wins with 29 KOs and 6 losses.