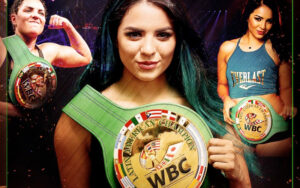 Attractive and charismatic Diana ‘Bonita’ Fernández, remains among the firsts fists rated in the the super flyweight division.

Fernández Ortiz has amassed 23 victories, including four knockouts; and she establishes herself with fans not only because of her singular beauty, but also because of the courage and good technique in her quest for the absolute crown.

‘La Bonita’, 26, defeated Mariana ‘Pantera’ Mercado at the end of last year, in a great contest.

Exclusive fighter for Promociones del Pueblo, Diana Laura has ambitious plans for this 2021; As she has already stated, her desire is to compete against 115-pound world champion Lourdes ‘Little Lulú’ Juárez, in a match that fans are hankering for.