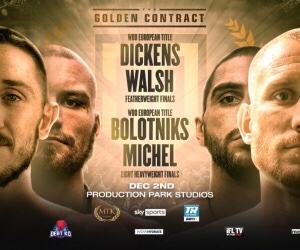 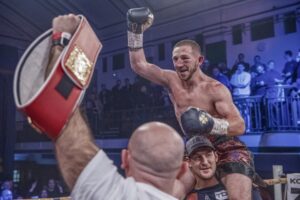 Fight Notes: Scores of 98-93, 97-94, 96-94 for a unanimous decision win for Dickens. He will will receive a two-year, five-fight “golden contract” with six-figure purses for each fight guaranteed.

“We’ve boxed many different ways in the tournament and seen many different styles, I proved I can do it all,” Dickens said. “Going into this tournament, I knew it was my chance to show what I can do all along, so I’ve had my moment on Sky Sport.

“In this tournament I beat British, Commonwealth and two European champions. I will have my reward when I win that world title.”

Fight Notes: Bolotniks knocked Michel to the canvas with seconds left in the 10th round with his corner throwing in the towel. Bolotniks will receive a two-year, five-fight “golden contract” with six-figure purses for each fight guaranteed.

“I’m just so happy,” Bolotniks said. “Maybe Anthony Yarde, Maybe we will have a fight next year. I am ready for 12 rounds, for 15 rounds, for 30 rounds! I will go and drink a beer and eat pizza.”

“Danny is a dangerous guy,” Eubank said. “I tried to keep it clean and use my boxing. Last time I didn’t get a chance to show my boxing. This time it was make him miss, make him pay. I handled the game plan fairly well.”