Dillian Must Prove He Can Shift The Rock of Gibraltar…and Alexander! 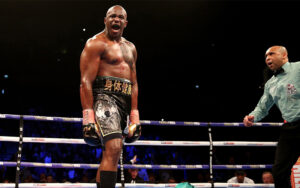 Dillian Whyte must move mountains, the Saturday after next, if he`s to climb back and challenge for the summit, thus leaving Alexander “The Great” Povetkin, at base camp, after the Russian so ruthlessly undermined him with a fifth round landslide KO, in their first rubble strewn rock face encounter last year.

At the Matchroom Fight Camp in Brentwood, matchwood disaster!  Dillian dominated the first four rounds. In that fourth he decked Alexander twice and it looked like Alexander`s fate was to log out. But NEVER EVER count out a big puncher in the heavyweight division, even, until and after, as they say : “The fat lady sings.”

Thirty seconds into the fifth, Dillian over reached with a punch, and Alexander, perfectly timed a searing left uppercut, which landed as a thunderbolt by Jove, on the button, to pitch Dillian unconscious on to the canvass. The Referee didn`t even bother to count.  Literally a sparked out stunning dispatch rendering comeback by the blonde bombshell Russian, which turned the tables in a split second, poker faced Sundance style.

It was back to the drawing board for Dillian, who`d only previously lost to Anthony Joshua. Through his fingers had slipped the WBC Interim Title and his championship opportunity, all via one lightning blockbuster, shockwave of a crunch punch.

Since then, Alexander has been diagnosed and has recovered from Covid 19.  The rematch, second time around, is on the Rock of Gibraltar. Dillian aims is to even demolish the Pillars of Hercules to prove his point, vindicate as well as redeem himself, so as to regain his Interim status. Alexander who`s a former world champion wants to show that first time around wasn`t a crock and again serve up a block knock.

To resume his reign, appropriately near Spain, he needs to drain a veteran, but vintage punching opponent who`s knocking forty…plus one.

This is a gargantuan test of the big punchers. It`s going to be a titanic thriller, and most unlikely to go the distance.  To quote a nautical term, neither chap likes the cut of the other`s gib!