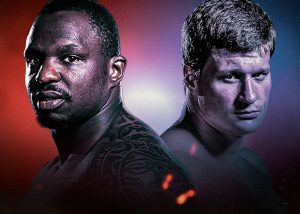 As posted yesterday, any hope of Dillian Whyte vs. Alexander Povetkin 2 happening in January is definitely off the cards. Eddie Hearn has said that Dillian Whyte is not going to hang around for Povetkin and is eager to move on with another opponent.

The original date was delayed with Povetkin contracting COVID-19. He was initially in hospital, sent home to further recover, resumed training and had to go back into hospital for a second time with the symptoms returning.

Povetkin, for the second time, is now back at home to recover.

“We will be reaching out to other players in the heavyweight division to see if they fancy it,” Hearn told Sky Sports News.

“I’d love to make Ruiz Jr vs Whyte, Wilder vs Whyte, Ortiz vs Whyte. Chisora is always ready. He is another name to throw in the mix, potentially, for Whyte if the Povetkin fight is delayed. He is always in excellent fights, always entertaining, he is on good form. But I really feel that Dillian needs to wipe that [defeat] off his record against Povetkin.

“That fight was planned for January 30 and previously November 21. Povetkin does need more time recovering from COVID but not too long. We expect him to have a four-week delay. When I conveyed that news to Whyte it didn’t go down very well! His first question was: ‘Who else can we fight?’ ‘Can we fight Luis Ortiz, Deontay Wilder, Andy Ruiz Jr?’ The answer is: ‘Yes any of those would be fantastic’.

“But he does want, more than anything, to avenge the defeat that he suffered at the hands of Povetkin. That is on his mind. So I said to him: ‘I think you should wait [to fight Povetkin]’.”

According to Povetkin’s promoter, Andrey Ryabinsky, he is taking longer to recover from COVID-19 than they had initially anticipated pushing the rematch further back.

In fact, Povetkin was taken to the hospital for a second time after symptoms returned.

“Alexander had to go to hospital again for examinations. The other day he was discharged and is now starting training,” Ryabinsky told TASS.

“We’ll increase the workload in stages, under the supervision of doctors. Boxing is a serious load on the body, I won’t allow Alexander’s health to be risked. There will be no fight with Whyte in January. We underestimated the consequences of the virus, everything did not go as smoothly as we thought…

“We will discuss and appoint the date of the fight when we understand at what pace we can move with preparation.”

Logan Paul: “None of This is Comprehensible” Mauricio Sulaimán: “Smith Represents a Significant Challenge For Canelo”