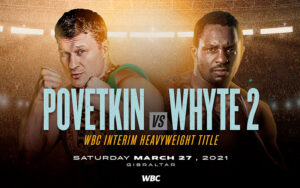 All on the line at the big hitting rematch, in Gibraltar this coming Saturday March 27th  in a blockbuster  between Dillian Whyte and Alexander Povetkin.

Last time at Matchroom Fight Camp in Brentwood, England, on blazing August 22nd  last year, it very much looked like Dillian had punched Alexander`s card. He dominated from the opening bell, putting the Russian down twice in the fourth. But then Alexander, who always, so to speak places his cards on the table, stopped playing poker face, and it became Russian Roulette in the fifth.

Dillian over reached with a flailing right, Alexander threw a left jab, moved back slightly and then executed a ballistic left uppercut. BOOM and Dillian`s WBC Interim title was gone in an instant and so was he, tangled through the ropes. He was spark out, flat out on his back, so the Referee didn`t bother to count. The WBC Diamond Belt was also up for grabs, so Alexander got that too. Big upset!

Both men have something in common. Each of them were stopped by Anthony Joshua in the seventh round.  Dillian, had defeated AJ in an amateur bout, but then came unstuck against him in the pros, during a battle for the vacant British title. Hurt in the first, Dillian struck back hard in the second and the third to stun Anthony. But AJ regained composure and the tide turned. A huge right which landed on Dillian`s temple in the seventh scrambled his senses and then he got caught with a crunching right uppercut which sent him through the ropes and he was KO`d.

Alexander got hammered in seven by AJ too. Anthony was hurt by a big short range left hook in the opening round and a few more to follow, as the Russian closed the distance and went to work.  Anthony quickly learned two important lessons. Box at distance maintaining mobility, as standing and trading with Alexander is always potentially lethal. Secondly, keep your right glove up to the side of your face, to protect yourself and deflect those powerful left hooks as well as uppercuts, ready to counter.

Using his height and especially reach advantages, AJ was able to increasingly pick off Alexander and then move out of harm`s way. In that fateful seventh, AJ caught him with a right and then a left, reversing the dose to put him on the canvass. Alexander bravely got up, but his legs had gone west and south. He was all but out on his feet and the Referee saved him, one punch too early, than one punch too late.

Wladimir Klitschko used a similar technique to dominate Alexander, knocking him down in the second and three times in the seventh, to successfully defend his WBA Belt, by a very wide UD.  This proves another point. Knocking Alexander Povetkin down is one thing. Keeping him down is quite another.

Alexander who was once WBA champion himself, has an impressive record as a pro. In 39 fights, 36 wins, 25 KO`s, two losses and one draw.  But, aged forty one he`s getting a trifle long in the tooth. Yet with a fighter like him, the last thing lost…is his punch.  The left hook is pure dynamite close in. The right is pretty potent too.  Toe to toe and given half a chance he can and he does achieve ructions and destructions.

Before he turned pro, Alexander won the European Amateur Championships in 2002 and 2004.  In 2004, he won Gold in the Olympics, all at super heavy.

Alexander was diagnosed with Covid 19 , and so the rematch with Dillian scheduled for November 21st was postponed. Just as well, because three months hardly seems enough for Dillian to have recovered from such a severe KO. Now fully fit, Alexander is determined to prove that he can deliver and inflict another spectacular KO defeat on Dillian.

Aged 31 Dillian is nine years younger than Alexander. His record stands at 29 fights, 27 wins, including 18 KO`S and two losses.  He`s taller and heavier than the Russian, but slower. Since the defeat, he`s been itching to get back into the ring and redeem himself with a KO victory.  More haste less speed!

Once the fight starts, Dillian would do well to be patient, keep it at middle distance by jabbing, parrying and counter punching Alexander, to neutralize that walk forward, hyper aggressive buzzsaw style. Stay on the move, don`t stand and trade and in so doing learn his lesson. Box a puncher, rather than trade, which constitutes a fifty/fifty give and take risk.

Alexander`s best strategy is to cut the distance, move in to unleash his short range power shots. To  keep pressuring, by hammering away. Once he gains a hand speed momentum he`s highly dangerous and often unstoppable.  Either hand can take you out, but the left hook is his special signature goodnight sweet prince leveler.

Age could work against “Sasha.”  He`s no spring chicken any more,  and the longer this goes, the more the age difference will inevitably show, as well as catch up with him.

In the heavyweight division, one massive power punch can change anything and everything at a stroke.  As the saying goes, you never see the punch that gets you. However, that left uppercut was no fluke. Dillian clumsily put himself in harm`s way, to be iced.

The question now, is if he`s truly learned, is wiser and will stay further than arm`s reach away.  Also…will he be trigger shy and flinch, or put it to one side, as a one off nightmare?  Physically and neurologically recovering from a KO is often easier than psychologically healing. Don`t blink!

Each can punch really hard, both have been down. One of them got up twice to finish it first time around. That was then and this is now.  Very unlikely to go the distance.