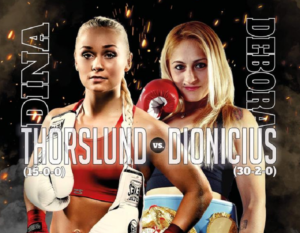 Dina Thorslund will look to become a two-weight world champion when she faces Debora Anahi Dionicius for the vacant WBO bantamweight title on June 25.

The fight will take place at the Struer Arena in Denmark, as Thorslund (15-0, 6 KOs) drops down in weight for the showdown with Dioncius (30-2, 6 KOs).

Thorslund already holds the WBO super-bantamweight title, having won the belt back in 2018 and making three successful defences of the title so far.

She now turns her attention to Dioncius, who previously held the IBF super-flyweight title, and also looks to become a two-weight world champion.

MTK Global Promoter Lee Eaton said: “We’re delighted to help Dina land this huge fight as she looks to become a two-weight world champion. She has already had immense success in the super-bantamweight division, and now looks to join an elite class of women who have won world titles in multiple weights.

“The bantamweight division is stacked at the moment, and it’s sure to be a great fight against Debora Dionicius. We’re thrilled with how much Denmark is firmly behind Dina, and she is determined to do her country proud.

“Dina isn’t looking past this fight, but we know what a big star she can be, and there are some massive unification fights out there for her next if she can win this.”