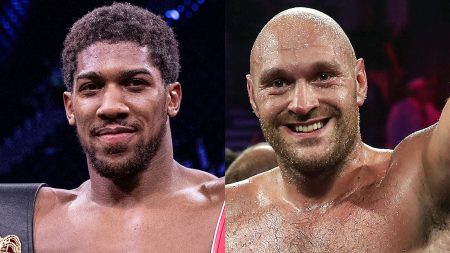 Boxing promoter Dmitry Salita says it’s the wrong time for the British foes to be facing off and says Joshua needs to take care of other business first following his Usyk defeat.

Salita: “It’s an interesting fight between Joshua and Fury. Anthony Joshua got better in the second fight against Usyk, but he’s still coming off a loss. You know who the favourite is in that fight between Joshua and Fury and who isn’t. I think if that fight happens in December it’s not as big as it could be, and I really don’t believe it can happen in December, because that’s a huge fight and it deserves a bigger build up. For Fury-Joshua to be as big as it could be, Joshua needs to put together some significant wins and improvements. The public wants big fights where some think this guy is going to win, or that guy is going to win. At this point, even though it was a good performance against Usyk, I don’t think there’s anyone who thinks Joshua has any chance to beat Tyson Fury.”

“I believe Otto Wallin versus Joshua makes a lot of sense. From what Eddie (Hearn, Joshua’s promoter) and Joshua have said, Joshua wants to be considered an elite, A+ heavyweight, and Otto is an A+ heavyweight. If Joshua comes back and fights a John Doe with no credentials, without a decent record, and no real name, then he goes back down to a very average level. In my opinion, just fighting an opponent with gloves on, with a professional record, without any real accomplishment – I don’t know if it does anything for him, it may decrease his value, depending on who the opponent is.”

Winner of AJ vs. Wallin could be world title contenders against Fury

“There aren’t many fighters in the heavyweight division that makes sense. Would he fight (Luis) Ortiz or (Andy) Ruiz, probably not – who else is out there? The boxing world is so splintered with promoters and broadcasters. Otto is a free agent, that’s why it makes sense to me.

“Looking at the heavyweight division it is so splintered and divided with top fighters being aligned with different broadcasters – there’s only a few fighters that makes sense. There are only a few guys available who the boxing fans would buy into and say he’s a legitimate fight for Joshua. Otto vs Joshua has all those ingredients. The winner of that fight becomes a legit world title contender.

“Otto objectively, judging by the numbers, landed more punches against Tyson Fury than Wladimir Klitschko and Deontay Wilder one put together. He gave him the cut and it was a significantly competitive, intense fight. I believe that for Otto and Joshua, fighting each other makes the most sense because the winner can claim and demand the Tyson Fury fight.

“Many felt Otto won that fight, he’s had four wins since that fight, he wants to put himself into a position to fight Tyson Fury and AJ wants to do the same. When you do these fights as a broadcaster, you want a story from both sides. Joshua and Wallin want to secure a victory so they can fight Tyson Fury. It’s not a one-sided story. Otto v Joshua – there’s a real story there – the fight with Tyson Fury is on the line for both men.”