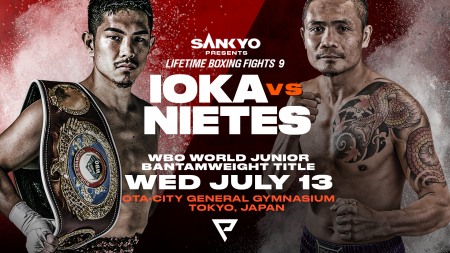 Donnie Nietes will add another chapter to his remarkable boxing story if he reclaims the WBO world junior bantamweight title next month.

The former four-weight world champion challenges Kazuto Ioka, in Tokyo, on July 13 for the belt he won in 2018, when defeating the Japanese star.

Nietes would relinquish the crown soon after the fight, allowing Ioka the chance to win the vacant title and almost four years on, the pair renew their rivalry at the Ota-City General Gymnasium in a fascinating clash of 115lbs greats.

The fight will be promoted by SANKYO presents LIFETIME BOXING FIGHTS 9.

Donnie Nietes, said: “This was the fight I wanted the most and I am incredibly eager to win back my world title.

“I have been in training since February for this fight but I really stepped up my levels when I knew it was confirmed.

“This rematch makes me excited and when I vacated the title in 2018 it was always in my mind that I would, one day, win it back. On July 13, that dream will become a reality.”

Nietes, 40, has won world titles at minimumweight, light flyweight, flyweight and up at 115lbs, where he takes on Ioka for a second time.

Richard Schaefer, President of Probellum, said: “Donnie is a boxing legend and a sure-fire Hall of Fame inductee in the future.

“But his career is far from over, there is plenty left in the tank and when he travels to Japan and rips the world title from Kazuto Ioka on July 13, it will rank as the greatest victory of his remarkable career.

“What a story it would be for Nietes to recapture the title he first won almost four years ago, and to achieve that in a great champion’s backyard, would make it even more special.”