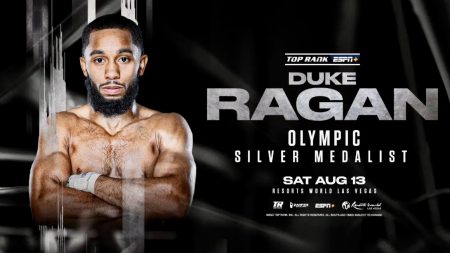 One year ago today, Duke Ragan (Cincinnati, Ohio) competed in the featherweight gold medal bout at the 2021 Olympic Games in Tokyo where he dropped a slim, split decision to Russia’s Albert Batyrgaziev. The Olympic finale was Ragan’s fifth bout in Tokyo and as he stood on the Olympic medal stand and received his hard-fought silver medal, Ragan could never have known what the next year of his life would bring.

The past year has been the ultimate roller coaster for Ragan as he lost his father Derek Ragan suddenly in early December. The heartbreaking loss delayed Ragan’s return to professional boxing as he grieved with his family. He stepped back in to the ring on April 9, scoring an unanimous decision victory in his first fight back.

Just under a month later, Ragan reunited with his Olympic teammates for their official visit to the White House on May 4. Ragan took the opportunity to score the ultimate selfie during his time with President Biden. The notoriously quiet Ragan yelled for the President’s attention while he was meeting the U.S. Olympic team members and tossed President Biden his phone for a selfie. The President snagged Ragan’s phone out of the air and obliged his request as Ragan’s teammates from multiple sports squeezed in for the priceless shot (found below).

Ragan was right back in the ring three weeks after his once in a lifetime trip to Washington DC and notched his sixth professional win on May 21.

Ragan will look to continue his winning streak in a six-round contest against fellow undefeated fighter D’Angelo Fuentes on August 13 in Las Vegas. The bout, which will highlight the undercard of Teofimo Lopez’s fight with Pedro Campa, will be Ragan’s fifth in Sin City and his second straight fight at Resorts World Las Vegas. His first three professional bouts took place in the Top Rank bubble in 2020 before Ragan headed off to the Olympics.

Ragan is currently preparing for his August 13 fight in Las Vegas with his coach Kay Koroma and several stablemates scheduled to compete in August as well. Fans can watch Ragan’s bout and the full undercard on ESPN+.