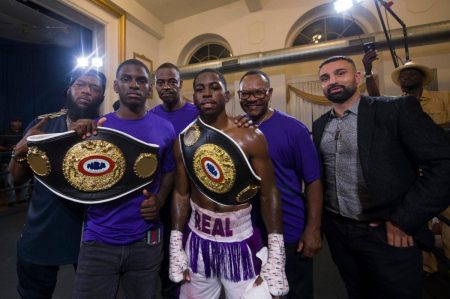 Bantamweight Dylan Price remained undefeated by displaying a scintillating performance in winning a 10-round unanimous decision over tough Drew Correll to capture the NBA Bantamweight world title at a sold out Elevations Event Center in Chester, Pennsylvania.

The six-bout card was promoted by Price Promotions.

Price came out fast by landing some wicked straight rights against the tall southpaw Correll. Correll looked to establish his long jab, and at times, he was successful. Price was able to put some vicious combinations throughout the contest. He was able to mix in hard body combinations with four and five flush punches to the head.

Price was able to crack, but not break down the steel-chinned Correll. Almost each time it seemed like that anytime Correll was teetering on being in serious trouble, he would keep Price honest with a little flurry of punches.  Price’s punches were accurate, and were accompanied with speed and power, that saw Price came home with the victory and the title by scores of 99-91 and 98-92 twice.

The co-feature saw Frankie Lynn of Chester need just 32 seconds to dispose of Prince Francis in a one-sided battle of pro debuting middleweights.

Lynn dropped an overmatched Francis twice before the fight was halted.

Erron Peterson used a vicious body assault to take out Jeremiah Kendrick in round three of their scheduled four-round middleweight fight.

Peterson threw powerful punches to the side of Kendrick until it was determined that he had taken enough punishment for the evening at 2:56 of round three.

Jalique Holden stopped Tyrique Gerald in round one of their four-round lightweight contest.

Abimbola Osundairo put on a power-punching display and stopped Tariq Green in round two of their four-round super middleweight bout,

The time was 1:45 for Osundairo of Chicago, who is now 2-0 with one stoppage. Green of Philadelphia is 0-1.

The card kicked off with Aaron Newmose winning a four-round split decision over Jamir Anderson in a battle of debuting welterweight.