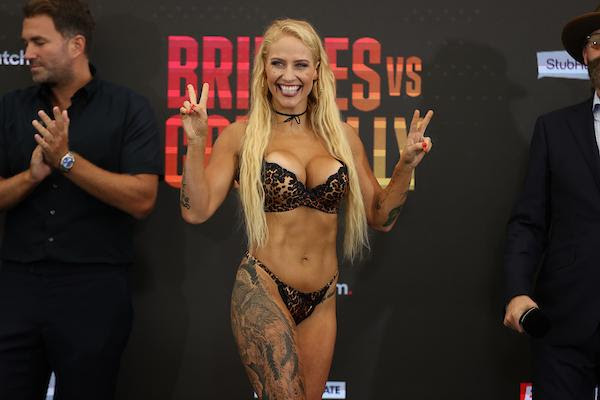 Matchroom HQ, Brentwood, Essex, England 7/8/21
Bantamweight sensation Ebanie “The Blonde Bomber” Bridges will look to once again take the United Kingdom by storm, when she takes on Bec Connolly in a eight-round bantamweight contest as part of Fight Camp 2 in Essex, England.
The bout can be seen LIVE on DAZN beginning at 2 PM ET. 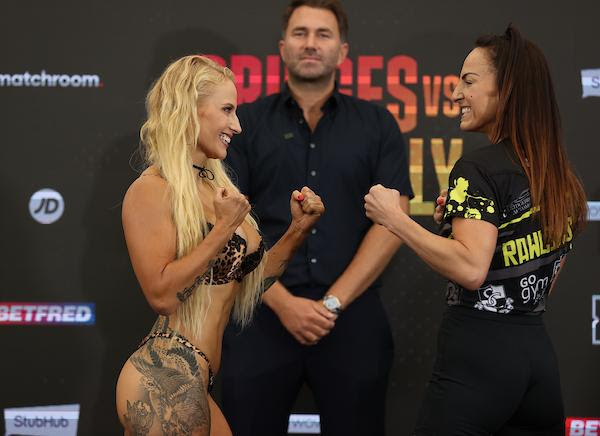 Bridges (5-1, 2 KOs) of New South Wales Australia captivated boxing fans all over the world with her heroic performance when on April 10th, Ebanie took on Shannon Courtenay for the WBA Bantamweight title.
Bridges fought most of the fight with one eye as she was cut early in the fight , but fought the undefeated champion on even terms for the whole fight before falling short on the judges score cards,
Bridges spent her camp in Philadelphia training with Brian Cohen and WBA Super Lightweight champion (and fellow Split-T fighter) Kali Reis.
Connolly is known as a tough fighter who has fought current 130-pound world champion Terri Harper.
Bridges weighed 118 3/4 lbs at Friday’s weigh-in, while Connolly was 119.