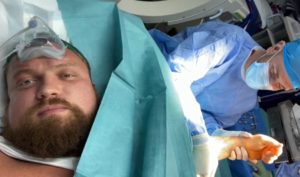 Eddie Hall has vowed to come back stronger after a bicep injury forced him to get surgery and delay his strongman showdown with Thor Bjornsson.

MTK Global are acting as the official boxing advisers to CoreSports for the fight, dubbed as ‘The Heaviest Boxing Match in History,’ but Hall’s injury has led to a postponement from the originally planned date of September 18.

The rest of the card at the VyStar Veterans Memorial Arena in Jacksonville, Florida, on September 18 will still go ahead, as CrossFit rivals Josh Bridges and Jacob Heppner collide, while the likes of Avril Mathie, Stefi Cohen and more are all in action.

The fight between Hall and Bjornsson is now planned to take place in March or April of 2022, and Hall has shared details of how his surgery went.

Hall said: “I threw a lazy hook and detached my left bicep. I had the surgery on Thursday and was awake for it all, and it was a complete success.

“The bicep has been reattached and I can move it already. I had the best surgeon in the world fly in from Germany to do the reattachment.

“The fight is delayed, so it won’t be in September, but it’s still going to go ahead. The CoreSports event is still going ahead in September with the rest of the card too, but I just want to let everyone know that I apologise.

“I’m in good spirits and I’m doing everything I can to recover as quickly as possible. I’m looking forward to getting back to training and ripping Thor’s face off.

“These things happen, but I feel bad for everyone that has bought tickets and wanted to see me and Thor in September. Again I’m sorry, but I’ll hopefully make it up to you guys around March.”