Eddie Hearn: “It’s The Only Fight to Be Made in Boxing” 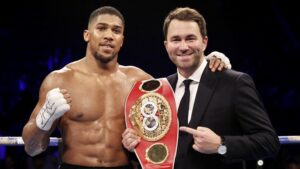 On the Joshua vs. Fury proposed bout:

“There’s been a lot of talk,” Eddie Hearn told Sky Sports. “As he said, it’s less talk, more action. Since he came into the office, he wanted to be the Undisputed Champion of the World.

“I can’t make it clearer from our side that everybody wants the fight,” he added. “It’s a natural fight. There’s nobody on the team who doesn’t want the fight. ‘AJ’ isn’t the kind of guy who is going to come out, screaming and shouting people’s names.

“Of course, he wants the fight and I’m going to keep schtum and tell you that it’s my job to deliver that fight next and I’ll do everything that I can to deliver it and we should start that immediately.”

On Pulev turning his back in round 3 (against Joshua):

“Pulev turned his back and it was over and the ref for some reason gave him a standing eight count,” Hearn told the Matchroom YouTube channel.

“The ropes weren’t holding him up and I thought he threw way to many rabbit punches, but it what it is and we got the win. It was a composed and brutal performance and exactly what he needed going into 2021. He hasn’t boxed in a year and he got eight rounds in.”

“It was an amazing fight,” Hearn, whose promotional charge Lawrence Okolie blasted out Nikodem Jezewski inside two rounds to set up a vacant WBO world title fight at cruiserweight against Krzysztof Glowacki, said about the main event just across the road from the 90,000-seat Wembley Stadium. “The fight was what it was, we got the win, it was a brutal but composed performance and it was exactly what Joshua needed.”