Eddie Hearn: “No Belts on The Line, Fury-Joshua Would Still Take Place” 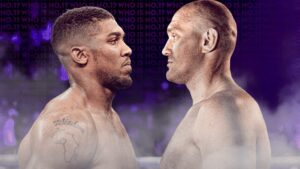 Eddie Hearn Interview on Fury vs. Joshua and The WBO

“I had a good chat with [Bob Arum] him last night. It’s positive, I think we’re all in the same position. We want to move forward with the fight, quickly as well, which is good news for fans.

“Just trying to solve any remaining issues of the fight, of which there aren’t many, to be honest with you, and try and move forward collectively to let the governing bodies know that we plan to stage this fight probably in May, and we would like this to be for the undisputed heavyweight championship of the world.

“A few small issues to iron out, but I think we can start look at drawing up contracts and try to get this moving. Here on both sides, every member of each team wants to do this fight. We all acknowledge this is the biggest fight in boxing, this is the best fight for both guys. This is for the undisputed heavyweight championship of the world. Why are you in the sport, if you don’t want this fight?

“If you listen to Bob, that’s not a problem. He is a lawyer and he knows his contracts and he tells us that Tyson Fury is contractually free to take any fight he wants. I do believe Deontay Wilder is appealing that, in the US courts, but we don’t expect that to be a problem.

“Ultimately the big issue for Anthony Joshua is he has a WBO mandatory now. We will be writing to the WBO to say you have an opportunity to be part of the biggest fight in boxing. One of the biggest fights in boxing history. Oleksandr Usyk is the WBO mandatory, we have to respect that, and the rules as well. We’ll be speaking to him to make sure he’s happy with a potential resolution.

“But for any reason Tyson Fury can’t contractually fight Anthony Joshua, AJ will fight Oleksandr Usyk next. For us, Usyk is a great fighter, it’s a great fight, there is only one name that we’re focusing on and that is Tyson Fury.

“They’re [WBO] in a difficult position, obviously, they’re desperate to be a part of this fight. They also have an obligation to OIeksandr Usyk as their mandatory.

“In an ideal world with the WBO, [Usyk] needs to be happy with the resolution. At the same time, if there are no belts on the line, [Fury-Joshua] would still take place and it would still be the biggest fight in boxing. It’s a tough one for Paco. He really wants to be a part of it but he just can’t ignore mandatory obligations at the same time.

“We have to come up with some kind of solution that will make everyone happy or else vacate the belt.”

WBC Uniting And Fighting Against Mismatches Logan Paul: “None of This is Comprehensible”