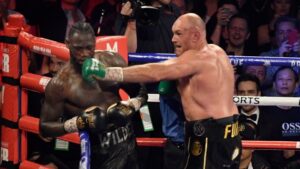 “We try and avoid the mess, and keep discipline and focus on what we’re doing, and the path for AJ has always been clear, with the ups and downs of the Ruiz fight, and getting that rematch over the line. But we know what we’re doing. December 12, it was announced probably eight weeks before the fight, we’re focused on the victory,” Hearn told Sky Sports.

“That’s their [Fury and Wilder’s] business, it’s a right mess either way, and it’s not going to resolve itself any time soon. Hopefully we can just make sure that if Anthony Joshua can beat Kubrat Pulev on December 12, then the path is clear for AJ against Fury in 2021.”

“If the legal action rumbles on, because ultimately after that fight with Pulev, we want to be in a position to say ‘This is the fight for the undisputed’. Get the sanctioning in place and obviously you’ve got Usyk now standing in the wings, saying ‘Once that Pulev fight is over, I want to be called as mandatory’. That’s just going to be another issue that we’re going to have to deal with. Hopefully, they can resolve whatever problem – who is right, who is wrong. That’s the job of the arbitrators and the mediators, and good luck to them,” Hearn said.

December 5th Comeback For Tyson Fury is Off “The Mason Brothers” Are Coming! 2020 USA Boxing Nationals