“Eddie Hearn Said It Was a Final Eliminator…It Wasn’t” 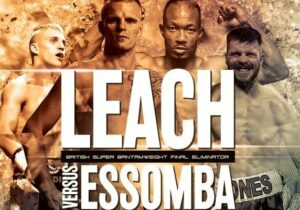 Marc Leach harbours a huge sense of injustice and says he will take that into the ring when he headlines on Fightzone at Sheffield Arena Car Park on June 5.

Leach, the former English Bantamweight Champ, will face Thomas Essomba in a British Super Bantamweight Title eliminator – despite having successfully negotiated two of these contests previously!

In his last outing in October last year, ‘Livewire’ Leach put in a tremendous performance to upset the odds and beat Leeds’ highly-rated Qais Ashfaq in what was billed as a ‘final eliminator’ for the Lonsdale Belt. However, despite that career-best victory, the 27-year-old finds himself having to go through the whole process again against former Olympian, Essomba.

In what is being hailed as a terrific match for boxing fans, Leach and Essomba are sure to give Fightzone viewers a memorable night. Leach, a former star amateur, has lost just once in 17 fights with that loss coming inexplicably on his debut. The Salford fighter has a great corner team behind him with Carl Frampton’s former trainer, Jamie Moore, the main man – and he heads into the bout with full momentum after his standout beating of Ashfaq.

In what could be a crucial factor, Essomba is also flying high and faces Leach after putting in a sizzling shift in his last fight against world-rated opponent, Thomas Patrick Ward. What was supposed to be a tickover fight for Ward became a nightmare as Essomba seemed to better him for most of the night before the contest was declared a technical draw after eight rounds, due to a Ward cut.

Essomba – from Cameroon but based in Wolverhampton – is a man used to being in the away corner. The 33-year-old has lost just six times in 17 fights but could likely have come out on top in most of them if he’d been the home fighter. This is an enticing opportunity for Thomas – who boxed in the 2012 London Olympic games, before making the UK his home – who will also harbour ambitions of fighting for the British belt.

“I definitely feel hard done by,” opined Leach. “I’d already boxed an eliminator for the British and won, then boxed Ashfaq with Eddie Hearn saying it was a final eliminator – I beat him and then somehow it ends up not being an eliminator!

“My manager [Steve Wood] said he’d been told that if I vacated my English belt then my fight against Ashfaq would definitely be for a final eliminator. So I gave up my belt but shot myself in the foot because I’ve got to now fight another one. This is supposed to be a ‘final final’ eliminator! How many finals do you have to win before you get a shot at the belt?

“This situation definitely spurs me on. Essomba is a good kid and I’ve seen him box but I think I’ll have too many tools in the box for him. He actually boxed on the same show as me when he got a draw with Tommy Ward, and he fought really well that night. I had him up by a round, and he’s a good fighter to watch. The better the opponent though then the better I fight.

“I’m one hundred per cent confident I’ll win.  I believe that on my night I’ll beat anyone, even at world level. I just need the opportunity to get those fights. I want to fight for titles, I put the effort in in the gym and at this stage of my career I can’t see myself rebuilding because the money isn’t there in boxing to pay the bills and feed the kids. So I want my shot at the British title.”