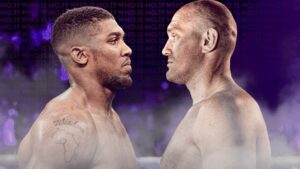 “At the moment as a country we have got better things to spend our money on than a major sporting event. We will be under a lot of pressure for that fight not to be in the UK but I don’t want both of them to be outside the UK if I can at all help it.

“The deal is done, without being signed. The financial elements are done, we are talking through the broadcast situation now. The only thing really to be done is to paper it.

“When you paper a deal like that it does go back and forward 15 times before every single letter is approved on the document. I don’t think the deal is taking longer than expected but the contract is. I believe we have the bass if a deal in place but we don’t have a signed contract.

“We’re in a position now where everything is being finalised in the contractual sense, then we will go to the venues where we’ve had offers. We’re almost at a point now where we can go out to the venues with confidence and say we have a fight.

“There is definitely not a venue agreed for the fight but there are conversations going on with a number of venues. Once everybody’s on board and signed, we’ll collectively go out and speak to these sites we’ve had approaches from and look to do the best deal for the fighters – not just from a financial perspective but from a logistical point of view as well.

“And everything is changing – one country is all of a sudden coming out of the pandemic, they’re really aggressive, they’ve got a lot of money for tourism, they want to say: we’re back. And then two weeks later they go into a lockdown so it’s very, very difficult at the moment to move with that much confidence or certainty and it’s not a great time to be discussing international sporting events but we’re at that period – end of May, early June – where people are a lot more confident that there’ll be in a better place to stage it.

“We’ve had so many approaches in the past about so many different fights. Generally, half of them are real and half are someone who’s trying to spin some commission. That’s why I want to get into a position where we can go out collectively to talk to these people once a deal is in place.

“I think the Middle East will be very aggressive and will be frontrunners in this. But we’ve had a lot of other interesting approaches from territories that we might not have thought were players in this fight but I believe they are.

“To stage this fight you’re going to need significant government support. I don’t think a major gate alone [will be enough], and this is the problem with the US where we could do a huge gate. It needs to be bigger than that.

On This Day: Muhammad Ali “The Greatest of All Time” Was Born 1942 Maidstone’s Lenny Fuller Joins MTK Global