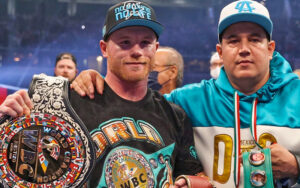 One of the best trainers in the world today, Eddy Reynoso, commented that the priority for the WBC super middleweight champion, Saúl “Canelo” Álvarez, is the unification against the North American Caleb Plant.

If all goes well from that fight, he will face other quality fighters.

Canelo is coming off categorically defeating Billy Joe Saunders, taking another step towards his goal of unifying the super middleweight division and proving that he is the best fighter in the world.

Eddy and Canelo are focused on gaining the fight against Caleb Plant for September, but if all goes well after this fight, they can consider facing other solid fighters.

“The most important thing now is the negotiations with Caleb Plant people, with his promoter and reaching an agreement.

“That is the most important fight we have ahead of us and then we will be able to see and think about other rivals,” Reynoso said in an interview with the Little Giant Boxing channel.

“I like the idea of ​​fighting with Charlo and Errol Spence if he goes up in the division and also with David Benavídez. We are ready to fight against any rival.”