Eddy Reynoso to Canelo: “I Sent Him to Get the KO” [Against Smith] 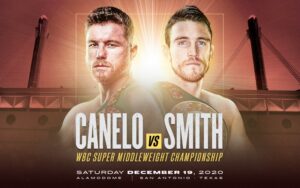 “With Saul there was a detail when he fought with Smith… in the third round he started to feel comfortable and he started wanting to play around with his hands down and walking forward. When he got back to the corner – I had to get his attention. I told him ‘you are not doing what you should be doing, do not underestimate him, that boy can knock you out with one punch, do not get out of your game plan because with that kind of guard he will catch you with the left or the right, even if you feel confident with that kind of guard, you have to go in the manner that we worked on – with our hands up so he doesn’t surprise you.

“In the final round I rarely send my boxers out there to look for the knockout and [it’s even more rare] when we are winning the fight so comfortably, but I sent him [to get the KO]. I said ‘you can knock him out, come out and throw everything, you have to try to knock him out.”

All things considered, Smith did well to last though to the end even though he has received plenty of negative press from the media for a relatively negative display. He is young enough to come back and learn from the experience.