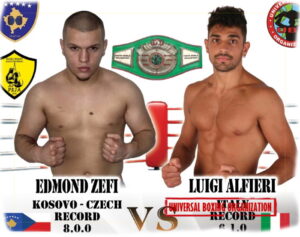 When the biggest boxing event in Kosovo history takes place on August 7 at the Palestra Karagac in Pec, one of the featured bouts will be an interesting clash of young up-and-comers.

Based in the Czech Republic, Edmund Zefi (8-0, 5 KOs) returns to his birth-country to take on Italian Luigi Alfieri (6-1) for the vacant Universal Boxing Organization™ (UBO) Youth World Welterweight title.

Having entered the paid ranks in the summer of 2018, this will be only the second time 23-year-old “King Edmond” fights in Kosovo as a professional.

Alfieri (25), from Vasto by the Adriatic Sea, is arguably the best young Italian at his weight. Last July he scored a split decision over 8-0 fellow prospect Pietro Rossetti in Rome.

Also on the card, promoted by Arena Ring and Gjocaj Boxing Promotion, will be Germany-based Kamer Maloku fighting in his birth-country for the first time.

Maloku (14-2, 11 KOs) takes on an opponent to be confirmed for the vacant UBO World Super Middleweight title.

All or nothing! Charlo and Castaño face to face Serdar Avci defeats Taryel Jafarov for UBO inter-continental title in Kiev