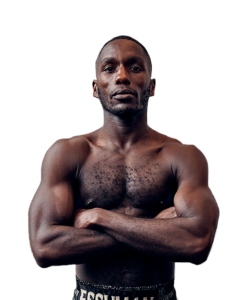 Ekow Essuman has declared he is “gunning for” domestic rivals Conor Benn and Michael McKinson.

Essuman has been frustrated after an injury to double champion Chris Jenkins delayed their fight especially after seeing rivals Benn and McKinson win recently.

The Nottingham boxer explained “When I saw the competition winning it got me itching to show people what I have been working on and how much I’ve improved.

“While I’ve been waiting for the fight to be rescheduled Conor Benn and Michael McKinson have had good wins.

“After I take the  British and Commonwealth title from Jenkins there are a lot of tasty fights out there.

“They are the fights I have to aim for, but as soon as I win those titles they will be coming for the jugular.

“Conor’s matchmaker has been spectacular. They have picked the right opponents to help him build his confidence in what he does.

“No disrespect to his opponents, but a lot of the things they did complimented what Conor does as opposed to putting him in there with a good mover.

“Take Benn v McKinson. Despite Benn’s strengths McKinson would win all day. He is awkward and wouldn’t play up to Conor’s strengths

“I will meet them both. I am gunning for them. It’s just when and where.”

Normally mild mannered Essuman is even doubting whether Jenkins suffered a perforated ear drum before their scheduled clash in March.

“I have had perforated ear drums before and they clear up in two weeks. When I heard he needed longer I asked myself, ‘Is this guy playing games?’, he added

“I did a lot of rounds with David Avanesyan before he fought Josh Kelly and I remember sitting down with him. I asked him how he coped mentally with the all the postponements over two years.

“He said that it had been a long time, but he was able to work on things that he needed to. That sat with me.

“I have taken that on board and I just have longer to cement the things I need to do against Jenkins.

“By the time I get to fight Jenkins things will be instilled in me and I will do them without even thinking.

“I see myself winning in good fashion. I don’t want to give too much away, but it won’t reach the final bell.”