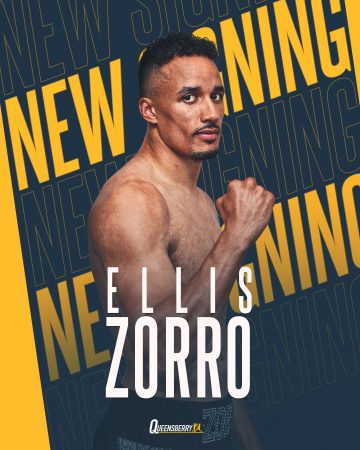 The 14-0 cruiserweight  star and Boxxer Tournament winner Ellis Zorro has signed a promotional agreement with Frank Warren and Queensberry.

The 29-year-old is trained and managed by Martin Bowers from the Peacock Gym in Epping alongside now promotional teammates Denzel Bentley, Chris Bourke and Louie Lynn.

A jeweller by trade, Zorro entered the tournament staged in May up in Manchester and cruised to success, beating James Farrell, Jamie Smith and Ricky Reeves via unanimous decisions.

He now becomes the most experienced member of the Queensberry cruiserweights, which includes Arnold Obodai, Aloys Junior and Natty Ngwenya.

Zorro believes his tournament triumph paved the way for a union with the Hall of Fame promoter.

“That is the benefit of these tournaments,” Zorro considered. “Sky were hosting it but, going forward, Frank is going to be taking care of my career anyway. It is all good.

“I went in to see Frank and he congratulated me on my performance in the tournament and offered me a contract going forward. Frank will be handling my career and I am over the moon with that.

“When I came here to the Peacock at 9-0 it was what I wanted to happen kind of straight away but obviously you’ve got to, not so much prove yourself to Frank, but now I have got something he can sell. I will always be the Boxxer tournament winner, I am now 14-0, No.10 on Boxrec and I will be fighting for international titles moving forward.

“I believe I have got a WBC Silver title shot in September, so it is all good.”

The punching jeweller Zorro was fittingly fitted out in a golden robe after winning the final and it was a competition he was convinced all along he would emerge victorious.

“At the time I was 11-0 and I didn’t have a contract with anybody. I wasn’t stagnant, but I’d just had two fights with Martin since being at the Peacock and one of them was a rematch against Ossie Jervier.

“I was kind of struggling with some direction but now, in the space of one weekend, it accelerated everything for me.

“It feels like it was meant to be and, as Martin is always saying, everybody gets a chance in boxing, you just have to be patient and be ready. When the call came, we were ready.”

Frank Warren added on his cruiserweight recruit: “I am delighted to sign Ellis and he was clearly the class act of the tournament. We have known about him for some time now through our strong relationship with Martin and this is perfect timing, with Ellis having increased his stock with three strong performances.

“There won’t be any delays now, we will put Ellis straight into title contention and really get his career firing on all cylinders.”