Eric Morales vs. Orlando Salido 16 days away – December 17 in Texas 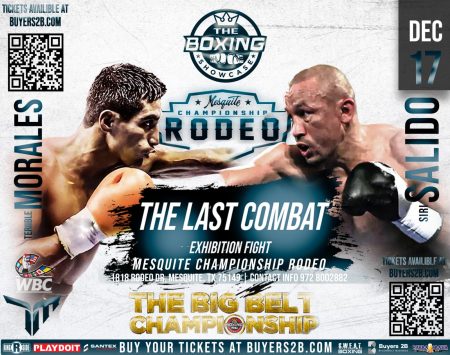 Former four division world champions, Eric “Terrible” Morales and Orlando “Siri” Salido will face off on December 17 at the Rodeo Arena in Mesquite, Texas, in a charity exhibition match.

Part of the proceeds will be used to support amateur boxing and to continue carrying out boxing week, which aims to support women against domestic violence and children against bullying.

The promoter Boxing Showcase will bring this exhibition bout to Texas turf to the delight of boxing fans and will serve as the framework for the second Semi-final of the national tournament The Big Belt Championship.

He starred in different spectacular battles and fabulous trilogies in three divisions, with Marco Antonio Barrera and with the champion in eight divisions, Manny “Pacman” Pacquiao.
For his part, Orlando “Siri” Salido starred in dramatic fights that kept the fans on the edge of the seats.