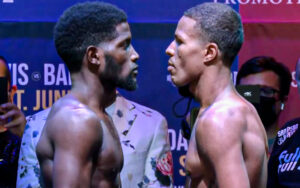 The WBC super welterweight Silver champion, Erickson Lubin, will face Jeison Rosario, in a match that will be part of the Davis vs. Barrios undercard, Saturday, at the Arena State Farm in Atlanta, Georgia.

The fight, which will also be a WBC super welterweight eliminatory, is promoted by the Premier Boxing Champions series and will be broadcast on Showtime Pay-Per-View.

This Friday both warriors achieved the official weigh-in without any problem. Lubin scaled 153.5 pounds, while Rosario weighed 154 pounds.

Lubin has not lost since October 2017, when he was knocked out in the first round by Jermell Charlo. Since then, he’s on a 5 fights winning streak to raise his record to 23-1, 16 knockouts.
While Rosario (20-2-1, 14 knockouts) was defeated by WBC champion Jermell Charlo in September of last year.