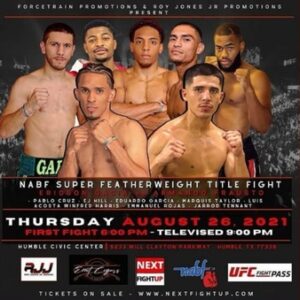 The 27-year-old Garcia, who is a native of the Dominican Republic, took a 10-round unanimous decision in convincing fashion from intra-state rival Armando Frausto (9-2-1, 5 KOs), fighting out of La Marque, Texas.

In the co-featured event, Detroit middleweight Wilfred Harris, Jr. (19-1-1, 9 KOs) and Vaughn “The Animal” Alexander (15-6-1, 9 KOs), fought to an 8-round draw. Alexander, of Saint Louis (MO), is the older brother of brother of 3-time, 2-division World champion Devon Alexander.

There was another draw on last night’s RJJ Boxing on UFC FIGHT PASS as Austin (TX) super lightweight Robert Kevin Garcia (8-0-1, 6 KOs) and Antonius Grable (3-1-1, 3 KOs), of Sarasota, Florida, fought to a 6-round draw.

In the opening UFC FIGHT PASS bout of the evening, Houston middleweight Eugene Hill, Jr. (2-0, 2 KOs) blasted out New Mexico’s Shane Hall (0-2) at the 45-seconds mark of the opening round.  Hall dropped Hall early and the fight was quickly stopped after a subsequent flurry of unanswered punches.

Houston lightweight prospect Luis Acosta (12-0, 11 KOs) remained perfect as a professional, registering his 12th victory with 11 knockouts, versus Italian-born Christian Danilo Guido, who  fights out of Argentina, midway through round one.