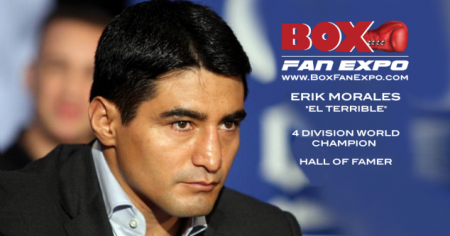 Four-division world champion and Hall of Famer Erik Morales has confirmed that he will appear at the Sixth Annual Box Fan Expo on Saturday, September 17, 2022, at the Las Vegas Convention Center from 10 a.m. to 5 p.m. The Expo will also coincide with the mega trilogy fight between Canelo Alvarez vs Gennady Golovkin, that will take place later that evening at the T-Mobile Arena.

Morales will hold a Meet & Greet with his fans at his booth during the fan event held over the Mexican Independence Day weekend.

Tickets to the Box Fan Expo are available at Eventbrite – https://bit.ly/BOXFANEXPO2022

Morales will make his third appearance at this years’ Expo and will be signing gloves, photos, personal items and memorabilia. Morales will also have merchandise to sell for fans to enjoy. Boxing Fans will also have an opportunity to take pictures with this boxing legend also known as “El Terrible”.

Erik Morales Nicknamed “El Terrible,” is a retired Mexican boxing legend and was inducted into the International Boxing Hall of fame in Canastota on June 10th, 2018). Morales compiled a 52-9 record in 61 fights, including 41 straight wins to start his career, and won world titles in four different weight classes (junior featherweight, featherweight, junior lightweight, junior welterweight). He also ended Manny Pacquiao’s six-year unbeaten streak in 2005 with a unanimous decision win. Morales notable fights came against Marco Antonio Barrera (nicknamed “The Baby Face Assassin”). The Morales versus Barrera trilogy is one of Boxing’s most famous fight trilogies of all time, involving two of Mexico’s most revered boxers. Their memorable fights were also named Ring Magazine’s fight of the year on February 19, 2000 and once again on November 27, 2004.

Tickets to the Box Fan Expo are available at Eventbrite –