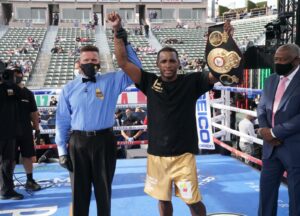 Cuban boxer Erislandy “The American Dream” Lara defeated American Thomas Lamanna by knockout in the first round to win the WBA World Middleweight title at an event held at Dignity Health Sports Park in Carson, California.

On paper, a more even fight was expected, but Lamanna was careless and Lara anesthetized him with a straight left between the chest and shoulder, knocking him out of action at 1 minute and 20 seconds of the very first round.

Thus, Lara won his third world crown in two categories (154 and 160 pounds). It should be noted that he entered the ring as the 154-pound champion, a division where he reigned between 2013 and 2018 after losing to Jarrett Hurd and later recovered the title in 2019 against Ramón “El Inocente” Álvarez.

After this forceful presentation, the pride of Guantánamo left his record at 28 victories, 3 losses, 3 draws, and 16 KOs. Lamanna, on the other hand, left his at 30 wins, 5 losses, 1 draw, and 12 KOs.

Eubank Jr. Returned to the Ring in a Dominant Way Against Morrison Ramos Dominates WBA Eliminator Over Figueroa in California