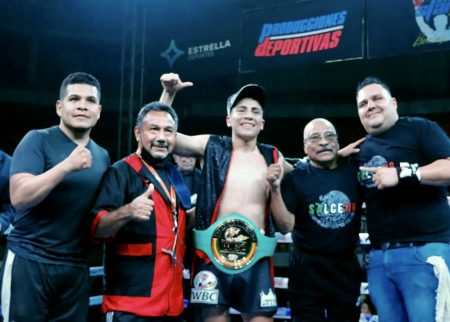 Hytan Ramos (11-5-2 & 3 KO’s) was technically knocked out at 52 seconds in the 10th round by Ernesto Salcedo (13-2 & 10 KO’s) in a 10-Round Super Bantamweight Fight. Salcedo took home the Fecarbox Silver WBC Title on EstrellaTV’s Boxeo EstrellaTV. The series occurs on the last Friday of every month, and last night, the fights were broadcast from Zinacantepec, Mexico.

A solid strategy and the tactical discipline of Ernesto Salcedo’s team were the keys to victory for a young man, who dominated most of the rounds, and was able to win by knockout in the final moments of the fight, taking revenge on what happened a year before.

Salcedo’s fight style – hitting, moving, and attacking from different angles – were a fighting style that Ramos could not decipher. Ramos was left at the mercy of Salcedo’s punishment, crushing Ramos little by little. Salcedo was successful in the first cut of cards, with an advantage of 37-39, 37-39, and 37-39 from the three judges.

Ramos forced the exchange of blows at shortstop; however, Salcedo attacked and came out with lateral steps, leaving many of his Ramos’ blows in the air, and with his guard down, to attack and continue scoring points.

Salcedo’s camp stuck to the fight plan and only gave their fighter instructions and words of encouragement so that Salcedo would remain calm and continue with what he worked on in the gym – taking advantage of Ramos’ mistakes to attack with overhands and hooks to the body.

Visibly tired, Ramos gave it his all in the later rounds. Salcedo fired him up with a flurry of punches in his own corner but had to be rescued by referee Rafael Saldaña, ending the fight in the 10th round.

In the co-main event, Ricardo Tellez González from the State of Mexico was unable to defeat a brave Eduardo “Choco” Cortés from Puebla, who took the win by unanimous decision, 73-78, 74-78 and 75-76, in an 8-round lightweight fight.

Jahaziel Ramos from Mexico City defeated Larry Serrano from the United States, by split decision, 39-37, 37-39, and 39-37, in a 6-round lightweight fight.

Bryan Becerril from the State of Mexico was caught off guard by a vicious left hook from Abraham “Gallo” Arreola of Mexico City, who earned the TKO victory at 23 seconds in the first round in a 4-round super bantamweight fight.

David “Chivo” Gutiérrez from the State of Mexico and Kennedy Serrano from the United States gave it their all; however, the judges gave a majority draw, 38-38, 37-39, and 38-38, in a 4-round welterweight fight.

Hector “Sepulturero” Munguia from Mexico City and Fernando Job Chichia from the State of Mexico put on an exciting fight but could not break the majority tie, 38-38, 40-36, and 38-37, in a 4 -round featherweight bout.