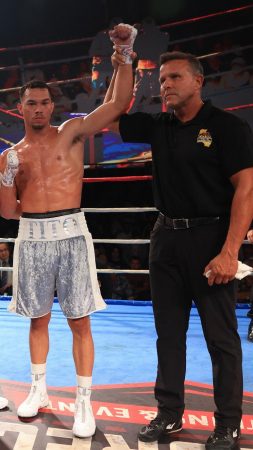 Rising lightweight star, Ernesto “Tito” Mercado (7-0, 7 KOs), kept his knockout streak intact last Thursday at The Hangar in Costa Mesa, CA, when he stopped Alfredo Rodolfo Blanco (22-11, 11 KOs) in the second round. Mercado vs. Blanco, an 8-round co-main event bout, was promoted by Roy Englebrecht Promotions.

Mercado was all action from the opening bell as he established his dominance, landing hard punches to the head and body. In the early part of round two, Mercado landed a powerful left hook to the temple, sending Blanco to the canvas. On wobbly legs, Blanco got up and continued fighting before being stopped by a combination flurry that Mercado unleashed. Time was 0:45 of round two.

“This was my first eight rounder and I was hoping to get to the second half of the fight, but I got him hurt and had to take him out,” Mercado said. “I like to consider myself as a true closer, one who, once I have my opponent hurt, will always look to close the show with a knockout. After the first knockdown, I knew it was just a matter of time before I got him out of there.”

Mercado has started his career off with seven straight knockouts and is rapidly becoming one of the most dangerous punchers in the lightweight division. He’s got the amateur pedigree to go along with his incredible punching power, which makes him a rare professional boxer.

“I was born with power in both hands, and I can take you out with a variety of punches,” continued Tito. “I know as my opponents get tougher, adjusting to different styles will be key when I go to the later rounds. Going the distance is something I know I’ll have to handle at some point in my career, but right now I’m enjoying ending fights early.”

“I like to think of my son as a boxer puncher, but lately he’s been taking guys out early,” said Ernesto Mercado Sr., who trains and manages his son. “I was expecting this fight to go more rounds, but Tito hurt Blanco with a nice shot, and he couldn’t recover. We are looking to fight three more times before the end of the year.”

How bad do you want it? The Viviana Ruiz story VIP Boxing still the busiest promoter in the UK