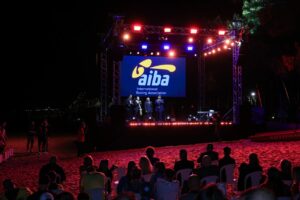 The bright opening ceremony of the EUBC U22 European Boxing Championships was held in Roseto degli Abruzzi to mark the start of the tournament. The first fights are scheduled for today, June 17.

‘The EUBC U22 European Boxing Championship is a further testimony that our continent has shown great courage and a strong commitment that we will defeat the Covid-19 pandemic. There are 41 countries that have registered their boxers and we can expect a high number of participants: 211 men and 96 women,’ Mr. Falcinelli said.

‘From the 17th to 22nd of June boxing fans can follow the event on live streaming from the preliminary contests until the semi-finals while the finals will be broadcasted by the Italian National TV, RAI at the Palazzo dello Sport, Pala Maggetti of June 24,’ he mentioned.

‘In addition, the AIBA R&J 2 Star Course will take place during the Championship with many European candidates. They will be evaluated based on their performance during the Championship where they will act as Referees & Judges. I am sure that the European boxers, men and women, will be able to demonstrate their technical skills to ensure a bright future of the European boxing,’ Mr. Falcinelli concluded.

AIBA President Mr. Umar Kremlev sent greetings to all the participants of the competition in Roseto degli Abruzzi.

‘I am confident that the participants will show their outstanding skills at the tournament in Italy. They are young but already elite fighters. I am glad to see them motivated to do their best. The fact that we have 41 countries participating makes me proud. This is a good sign that boxing is developed on the continent,’ President said.