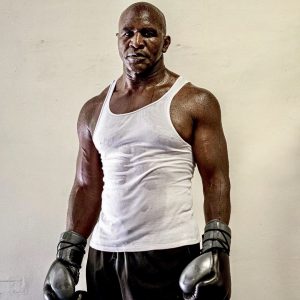 As he approaches his 58th birthday (October 19th) the details of Evander Holyfield’s ‘comeback’ have been said to be imminent. Holyfield (44-10-2, 29 KO’s) was previously the top of the list as Mike Tyson’s comeback opponent but that position was given to sacrificial lamb Roy Jones Jr. (or that is how team Tyson view him and many others).

Rumours are also ripe about Riddick Bowe joining the comeback clan paving the way for a Holyfield vs Bowe exhibition. Whilst a svelte looking and fit Bowe cannot realistically be expected, it puts into perspective how good Holyfield actually looks at his advanced age.

Bowe was last seen in a ring in 2013, having his shins kicked to death by a Muay Thai fighter half his weight in Thailand (Levgen Golovin). Golovin will at least be able to tell his grandchildren he defeated the future hall of fame former heavyweight champion of the world.

This trend of retirees is gaining momentum with many long retired names coming out of the woodwork. If the Tyson vs Jones Jr. event is a success and Jones Jr. is not decapitated in the process (on the rescheduled date of November 28th), it would be great to see Bowe bank some money having been seen selling boxing memorabilia at car boot sales over the years after retiring with a reported $15 million that did not last long.

Back to Holyfield who last fought in 2011 and beating the way out of shape (if he ever was in shape) and fellow senior Dane Brian Nielsen. Like Tyson, he is taking all very seriously and if an exhibition did come about, the sight of Tyson and Holyfield in the same ring, in shape and having passed all the health checks will be a sight to see and many will pay to see that.

You can add me to the list of the PPV purchasers but that also is the same for the Tyson vs Jones Jr. event. To me, it’s like some guilty pleasure but as long as it is safe, why deny fighters the chance to either further earn, top up their ring earnings or as is the case of Bowe, allow a still proud former champ to sort their selves out and pick themselves off of the floor financially. If the reports are true, Tyson’s share of the November 28th event is going to charity. Even better.

One thing for sure, Holyfield looks great. Although he has had his financial problems and doesn’t live in a property with 100+ rooms (he did at one stage), he is at least comfortable and looks in the best of health.

Stand by for against who and held where, I just hope they will be in the same shape as Evander.