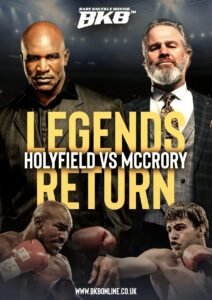 Interesting news today where it has been announced that Evander Holyfield vs Glen McCrory in an exhibition has been agreed upon for potentially April 2021 at the O2 arena.

Former Cruiserweight champion and boxing pundit McCrory has not fought professionally in 27 years (losing to Alfred Cole) though has showed interest in the past to return for a boxing bout. Along with Johnny Nelson, the two were previously reported to have been considering one of the Prizefighter tournaments in the UK.

The bout will be promoted by the Bare Knuckle Boxing company with the bout to be gloved in the traditional way. You Tubers Jake Paul and Joe Weller may feature on the undercard.

As reported by boxen247.com yesterday, Holyfield wants the trilogy bout with Tyson, the hope is for this bout to create a greater demand for the two fighters to square off for the third time.