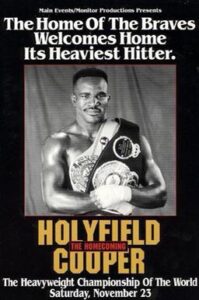 Evander Holyfield vs Bert Cooper video. This heavyweight championship title defence took place 23/11/91 and was Holyfield’s “homecoming.” Cooper was the third choice opponent, after Mike Tyson and then Francesco Damiani had to pull out, both with injuries.

On the day of the fight, Holyfield was a huge betting favourite over Cooper, but Cooper surprised all by taking his opportunity with both hands.

Cooper was down in the first round but battled back bravely, to the point of in round three, Cooper landing a right hand to Holyfield’s head that staggered the champ. Cooper then got Holyfield against the ropes and landed a combination that included a right hand to the back of Holyfield’s head. Before Holyfield could fall to the canvas, he grabbed the top rope to keep himself up. Despite not hitting the floor, referee Mills Lane called it a knockdown, the first of Holyfield’s professional career.

After three more rounds, Holyfield ended the fight late in round 7. With 20 second to go in the round, Holyfield hit Cooper with a long combination. Though Cooper never went down, he could no longer defend himself, causing Lane to stop the fight with two seconds left in the round and award Holyfield the victory via technical knockout.

“Smokin” Bert Cooper (he was originally trained by Joe Frazier) and retired with a boxing record of 38-25, 31 KO’s that does not justify what this heavyweight warrior brought to the ring. He was plagued with ‘issues’ that hindered his training and ultimately his boxing career. If he was more dedicated, consistent and focused, he would of achieved a lot more. What he will be remembered by was the battles that he engaged in, many ‘fight of the year’ contenders.

Some notable battles he engaged in included against, Michael Moorer, Ray Mercer and many more. Some of these fights you can find in our ad-free fight video catalogue within this website. 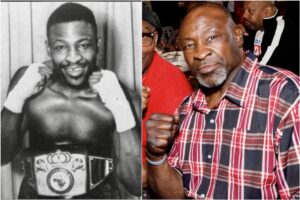 Sadly, Bert Cooper had his last battle against pancreatic cancer and passed away on 10/5/19, the “smoke” was finally put out at the young age of 53. May he rest in peace.