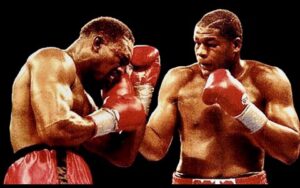 This was Holyfield’s fourth defence of the titles he won from Buster Douglas in 1990 and was the first of three meetings between the two boxers with this bout the most intense.

The “real deal”and “big daddy” went at it straight away. This was a battle from the start, with exciting back and forth action from the first bell through to the end of the fight.

In what turned into one of the best heavyweight boxing bouts of all time, Bowe conquered Holyfield with a unanimous decision, winning three judge’s scorecards with scores of 117-110, 117-110 and 115-112.

Although he was favored, Holyfield had trouble trading with the larger, younger and stronger Bowe, Bowe landed 53 percent of his 248 punches while Holyfield was only able to land 39 percent of his 161 thrown.

The battle is possibly best known for its 10th round, one of the best in boxing history. Holyfield was down from a barrage of punches, nevertheless, managed to weather the storm and even commanded the second half of this round, landing a number of bombs of his own.

Although announcer Jim Lampley asserted it would “look like a miracle” for Holyfield to complete round 11, Holyfield somehow managed to endure the rest of the round. Knowing he was behind on the scorecards and might require a knockout to win the battle, Holyfield was competitive in around 12, Bowe managing to defy Holyfield’s still determined effort throughout the round.

Bowe was crowned the new Heavyweight Champion of the world.

Holyfield and Bowe fought a further two times, in 1993 (Holyfield won by decision) and in 1995 (Bowe won by knockout). Holyfield eventually retired in 2011 and Bowe in 2008 with the two pugilists featuring in most observers all time heavyweight top ten.