Faze Temper to fight KSI in London on January 14 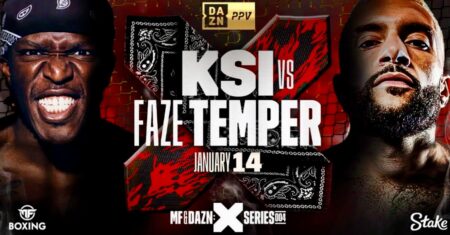 FaZe Temper will replace Dillon Danis at the top of the bill fighting KSI in the main event at MF & DAZN X Series: 004 January 14. This blockbuster fight night will be broadcast live on DAZN and DAZN PPV around the world from the London’s OVO Arena, Wembley.

With a combined following of over 60 million fans across their social media channels, this fight will see two of the biggest stars in this space collide on the biggest stage in crossover boxing. Temper has proven he can halt his opponent with power in his hands, whilst KSI continues to rewrite history books after his ‘Two Fights, One Night’ showstopper at the inaugural MF & DAZN: X Series 001 event.

KSI said: “I mentioned at the Press Conference that Dillon was being haunted by me. He made his excuses and knew he couldn’t handle what I bring to a boxing ring. This answers the question whether he’s a fighter or not. He’s a warrior alright, a keyboard warrior, and hopefully he’s learnt to leave the real men to speak with their actions rather than hollow words.”

“That being said, my focus won’t be distracted from the task at hand and that’s FaZe Temper. We’ve come head-to-head plenty of times with the Sidemen and FaZe Clan competing against each other, and it looks like we have another challenge on our hands. Credit to Temper for stepping up like a REAL fighter.”

After a destructive performance against Overtflow at the MF & DAZN: X Series 003 event in Texas, FaZe Temper is primed and ready to dethrone the King of crossover boxing, KSI.

FaZe Temper said: “I showed exactly what I can do in my last fight. At any moment in the fight, I can catch my opponent and you can see how they respond when that happens. The Sidemen have been on top for too long, and it’s time for FaZe and I to show them exactly what we’re made of. Sure, KSI is a huge name, but only one man is going to come out of this victorious. I hope he’s as prepared as he says he is, because I’m coming to London to do one thing, and that’s claim a massive win inside that ring.”

Kalle Sauerland, Co-President of Misfits Boxing and Head of Global Boxing at Wasserman said: “2022 taught me to embrace the madness, and here we are again but the show must go on! Where one door closes, another one opens, and this is an incredibly exciting and hard fight for KSI. We’re guaranteed a brilliant night of crossover boxing once again, and we can be sure to expect more dramatic, edge of your seat, moments as the MF & DAZN: X Series makes it comeback in the capital with 004 in London.”

The 14th January will see another page in the ‘Sidemen vs. FaZe Clan’ saga as the leading men look to claim the biggest win to date in the battle between their group’s competitive rivalry. With a fresh name now standing between him and his goal of dominating the crossover boxing world, KSI is promising a performance to remember.

Anthony Yarde: “It is the biggest fight of my career” Leigh Wood faces Mauricio Lara in Nottingham on Feb. 18