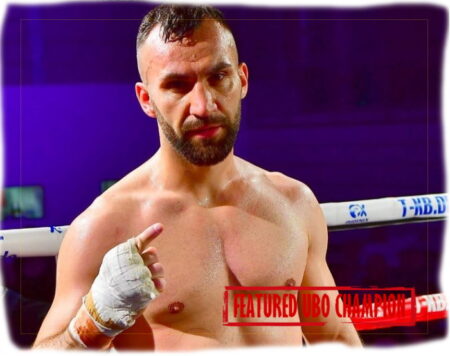 Universal Boxing Organization™ (UBO) World Super Middleweight Champion Kamer Maloku, 15-2 (12), has been a pro for eight years, but it didn’t always look as if he would make it to the top.

In fact, the Germany-based Kosovan started off losing his first two professional bouts, in 2013 and 2014, and then didn’t fight again for over two years.

But when he returned to the ring in October of 2016, he scored his first paid victory and has not looked back since, winning fifteen straight.

In March of 2018 he captured his first title, scoring a unanimous decision over Hungarian Attila Korda (13-7) for the GBU Continental title.

He defended the GBU title three months later, before adding the World Boxing Federation (WBF) International title to his resume the following December with a stunning fourth round stoppage of capable Argentinian Miguel Suarez (15-2).

A year later, after scoring three non title victories in the interim, he picked up the vacant UBF International belt by stopping Jose Agustin Julio (24-8-1) from Colombia, before the Covid pandemic kept him inactive for the entire 2020.

Maloku won stay-busy fights in January and April of 2021, preparing himself for his careers biggest fight for the vacant UBO World Super Middleweight title against Bosnian Bosko Misic (22-15) on August 7.

This was his first fight in Kosovo as a pro, having campaigned mainly in Germany, and he made sure to make a statement in front of his fellow countrymen as he stopped Misic in three rounds.